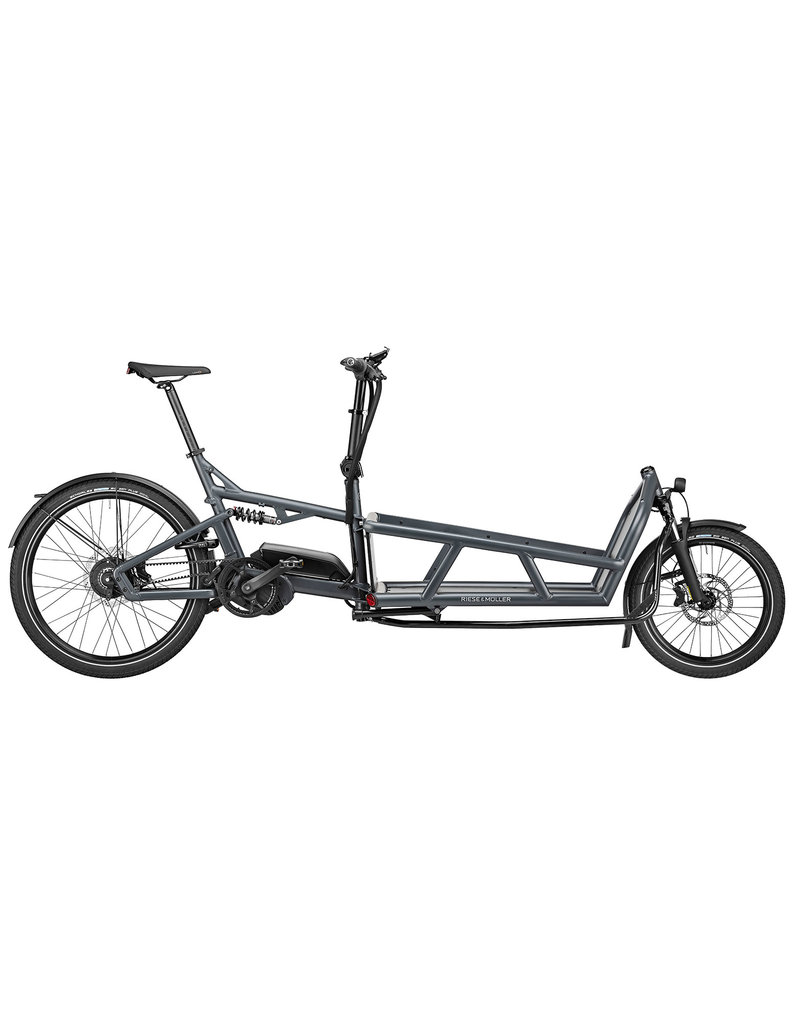 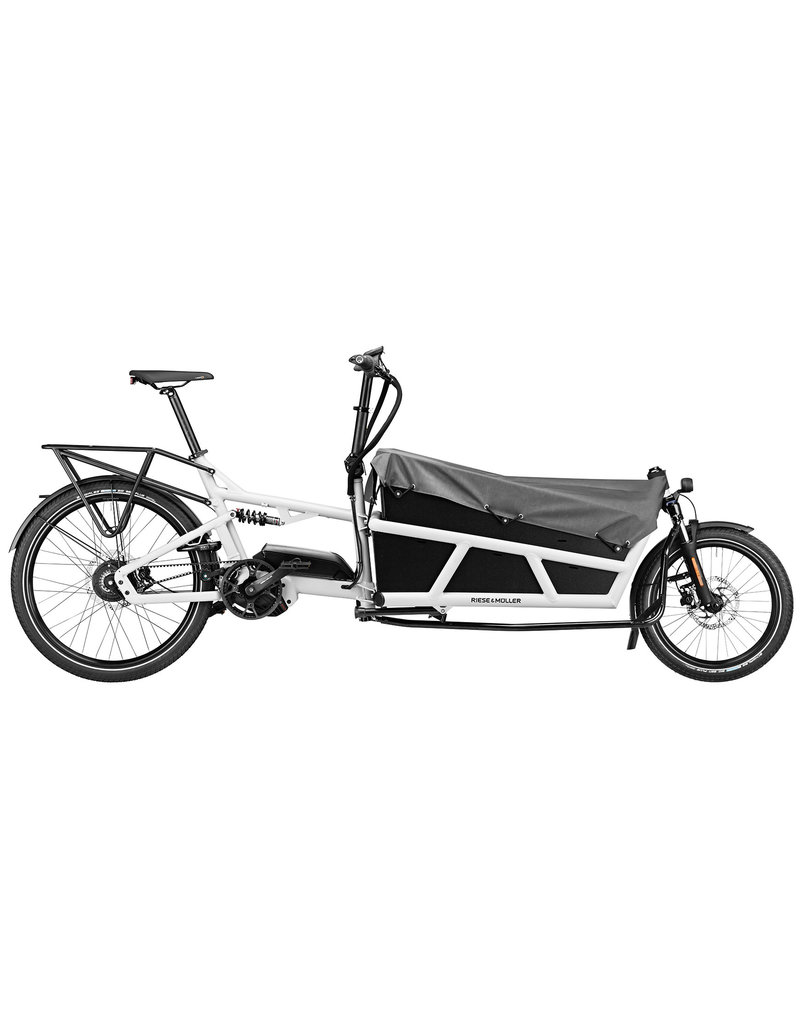 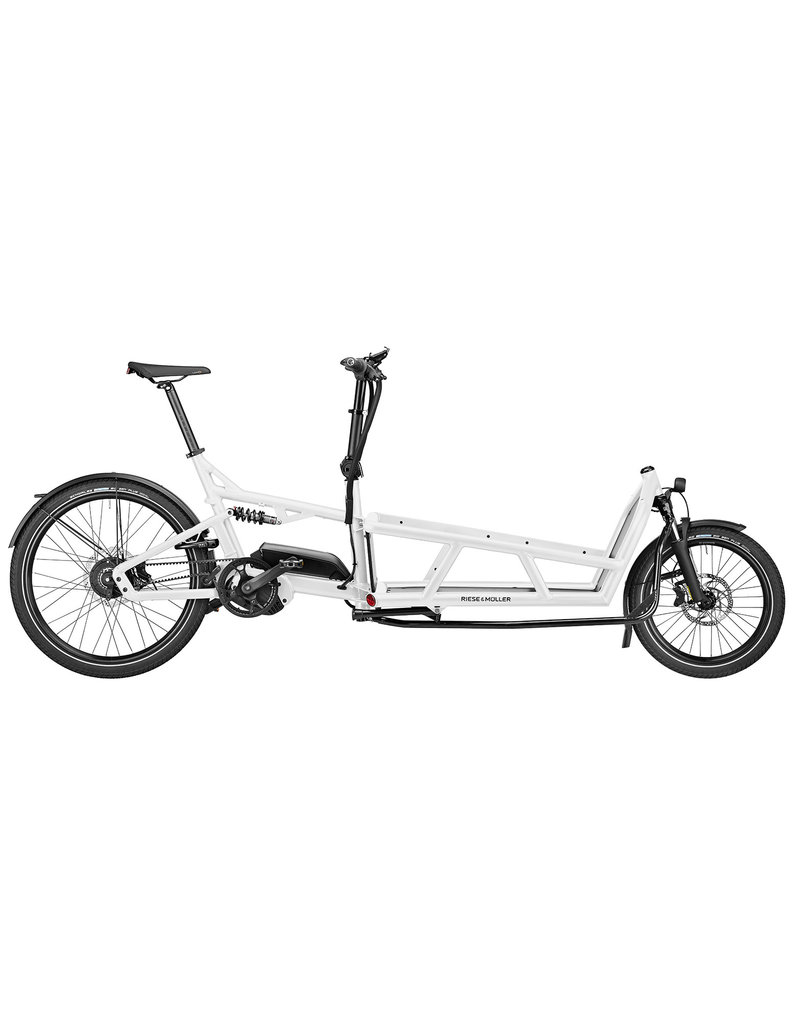 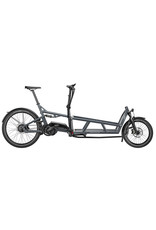 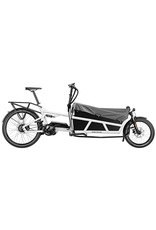 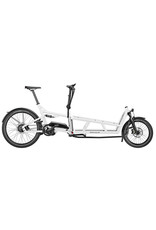 We currently have a Load 75 demo model in our store that is available to test ride.

Disclaimer: The price listed above is the starting price for a Load 75 Vario (belt drive with Enviolo internally geared hub). Riese & Müller bikes are highly customizable and can be configured in a number of different ways. Here is a link to the Riese & Müller website where you can begin your very own configuration of this bike. It is not possible to complete a purchase of this bike on our website. In some cases we do have inventory in-store available to sell; in most cases Riese & Müller bikes will need to be custom ordered with approximately 1-4 months of lead time.

The Riese & Müller Load 75 is an electric assist cargo bike of exceptional comfort and quality. Not only does it feature a front suspension fork with 70mm of travel, capable of absorbing the cobbles and bumps of the city, but it has a built-in X-Fusion Glyde rear suspension as well. This pairing of shock absorbers (which Riese & Müller has dubbed “control technology”) dampens, if not utterly silences, the often withering feeling of vibration and instability which can accompany riding a bicycle at high speeds on rough terrain, be it paved or not. It’s safe to say that the Load 75 possesses the most cushioned ride for either the driver or occupants of any e-assist cargo bike.

Furthermore, the Load 75 shares and expands on the same adjustability features as its sibling the Packster. A quick release adjustable stem not only telescopes up and down to accommodate riders of different heights, it also has tool-free angle adjustability forwards and backwards, to extend or reduce the amount of reach to the handlebars. The seatpost is similarly adjustable without tools.

Bosch provides the motor, display, and battery--the entire e-system for the Load 75. Either a Bosch Cargo Line Cruise 4.0 or a Bosch Cargo Line Speed 4.0 motor powers the bike, depending on the Load 75 model variation chosen by the buyer. Both motors provide 85Nm of torque and up to 400% pedal assistance. The Cargo Line Cruise is a class 1 eBike motor with a maximum assisted speed of 20mph and the Cargo Line Speed is a class 3 eBike which can provide motor assistance all the way up to 28mph.

The Load 75 can accommodate up to 1000Wh-worth of batteries in the form of two 500Wh Bosch Powerpacks, one housed on the rear of the storage box, the other mounted to the frame to keep the center of gravity low and stable. The buyer ultimately has the choice between a single 500Wh battery or upgrading to the Dual Battery setup with 1000Wh of battery life, doubling the bicycle’s range. This choice lets the rider select the battery option which will give them the range they desire, to span the city, the suburb, and beyond, even with cargo. Lastly, one can choose between three Bosch displays. The standard display option on the Load 75 is the intuitive Intuvia display. However, one may wish to upgrade to either the SmartphoneHub or the powerful, multifunctional Nyon display.

Riese & Müller have built the cargo section of the Load 75 to accept a variety of cargo carrying vessels and covers. When ordering a Load 75, one will choose from several front cargo options, with some intended more for open-ended, general cargo hauling, and some intended specifically for family and child transportation. All Riese & Müller bikes are built-to-order, and the process to configure a bike involves a number of choices and selections. Although this may seem overwhelming at first, that's where we come in. If you're interested in purchasing a Riese & Müller bicycle, reach out to us and we'll talk you through each choice and explain each option, tailoring your bike so that it meets your individual needs.

Add your review
0 stars based on 0 reviews

This single pannier from Ortlieb is fully waterproof, durable, comes in a variety of colors, and has a roll-top closure allowing the bag to expand as needed for larger loads.
Add to cart
Ortlieb Back-Roller Plus
$120.00 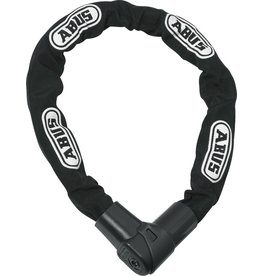