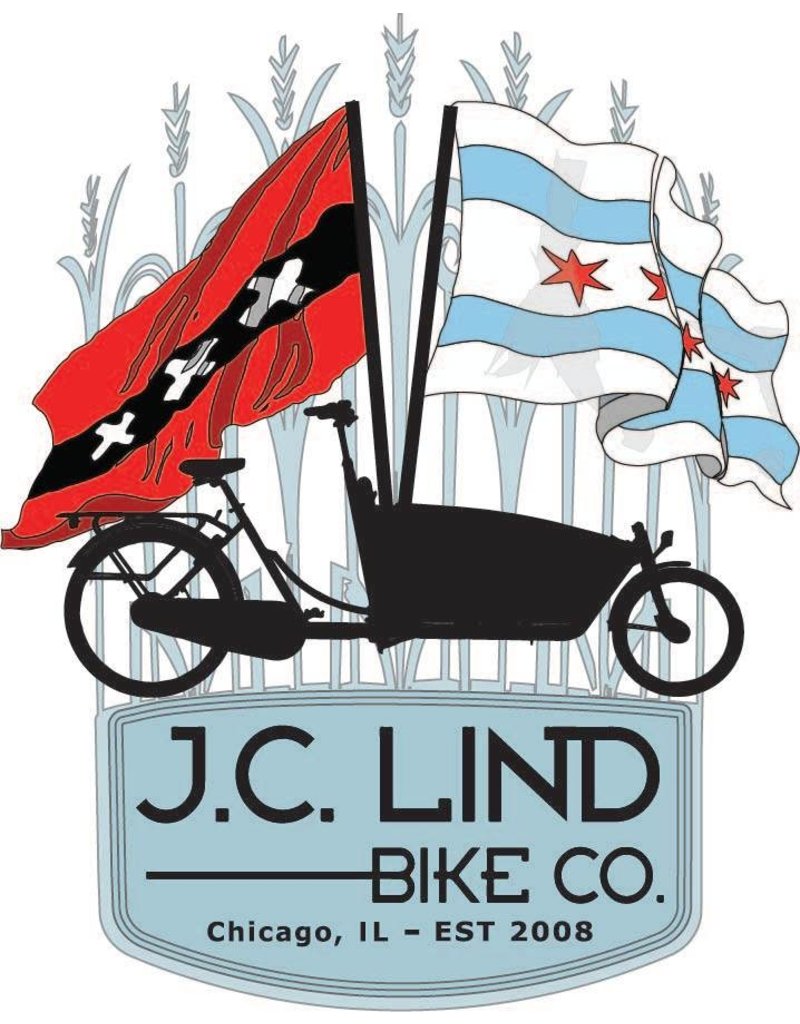 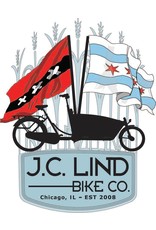 If you’ve ever come into the shop and bought something, chances are you saw a display with a few custom stickers we’ve designed over the years. It’s both fun and challenging to condense all the images and ideas we associate with J.C. Lind Bike Co into a tiny sticker. Perhaps it goes without saying, but the stickers aren’t a big moneymaker. We like having them as a visual record of where we’ve been as a business, not to mention you can use them to personalize your bike, in a way that links us all together as members of the J.C Lind Family.

Flags work well as small icons because they’re meant to be easily distinguished at a distance. Hence, you’ll see on this sticker two flags we know all too well here: the Amsterdam flag on the left, and the Chicago flag on the right. We like to think of ourselves as a (bicycle-centric) bridge between these two places.

Which bike’s silhouette is best suited to anchor the center of this sticker? Well, the decision had a lot to do with which bike’s silhouette had the right aspect ratio (mostly horizontal) and which conveys the idea that this shop sells bikes that are a little… different from what you can find abundantly in the U.S. For both of those things, we had to go with a bakfiets. Even shrunk down to an inch and a half long, a bakfiets silhouette reads as a unique bike, a cargo bike, a Dutch bike.

Lastly, there’s a background design borrowed from the Chicago Board of Trade’s Art Deco interior; a staggered row of wheat. The J.C. Lind Bike Co. logo has quite a few Art Deco elements, so any background would have to match in order to be cohesive. Even better to create a background that borrows from a famous landmark a couple miles from the shop.