Freshly back from an extended weekend in Northern California to see some of my family and my girlfriend’s friends. Figured I’d share some thoughts from the trip. We were there for 6 days and 5 nights, and we stayed in a sweet airbnb that was a converted Airstream trailer in the host’s backyard in Berkeley. Berkeley is on the East Bay just north of Oakland. Here’s a map for good measure. 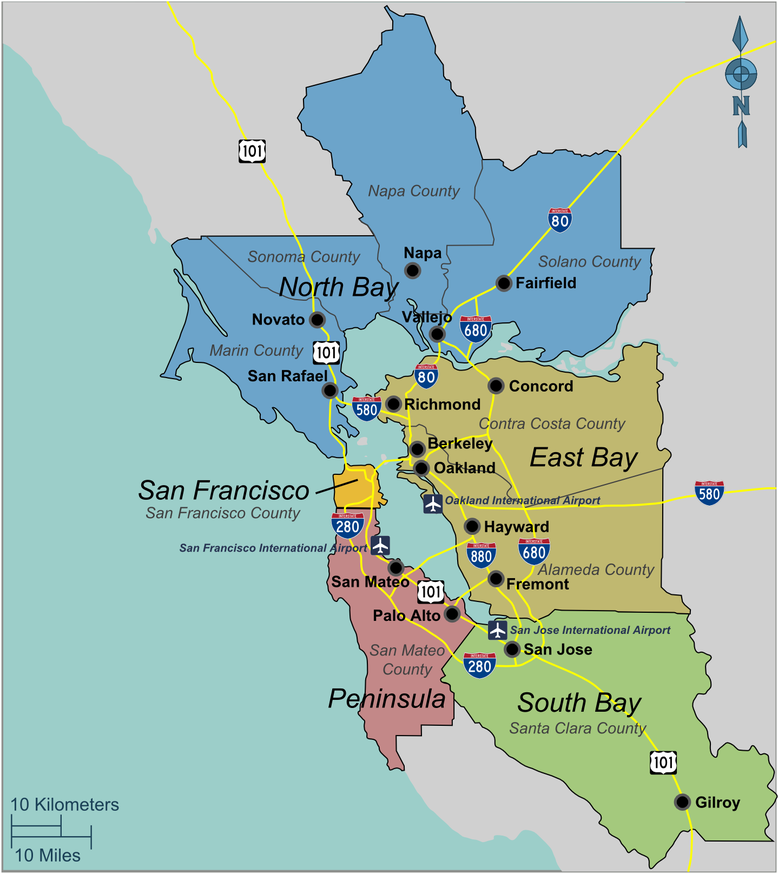 Before going further, a few thoughts on Berkeley. I loved it. The pace was perfect, the people friendly, lots of energy from the college campus, bike boulevards throughout and plenty of people getting around on bike. The weather was warm in the high 40’s to low 60’s (OK, warm for a Chicagoan in January). Some rain but seeing as they’ve been in a drought of biblical proportions we were happy to see rain was finally falling. I didn’t see any strip malls and noticed a good number of independent mom and pop shops all over town.

We spent the majority of our time in Berkeley but also got a full day of exploring San Francisco (important to note here that it’s OK to say San Francisco or simply refer to it as ‘the city’. It however is not kosher to use abbreviations like San Fran, Frisco or even the nice and clean SF). We also spent the better part of a day checking out Oakland and had an afternoon up in Marin County in Tiburon.

People were getting around on two wheels just about everywhere we went. In Berkeley there is a complete network of bike boulevards and in San Francisco there were brightly painted green bike lanes on a lot of the streets. Some fully protected and some just designated bike lanes with the green paint. Something I can imagine actually works well all four seasons since the streets are never covered in snow or salt and winter grime. 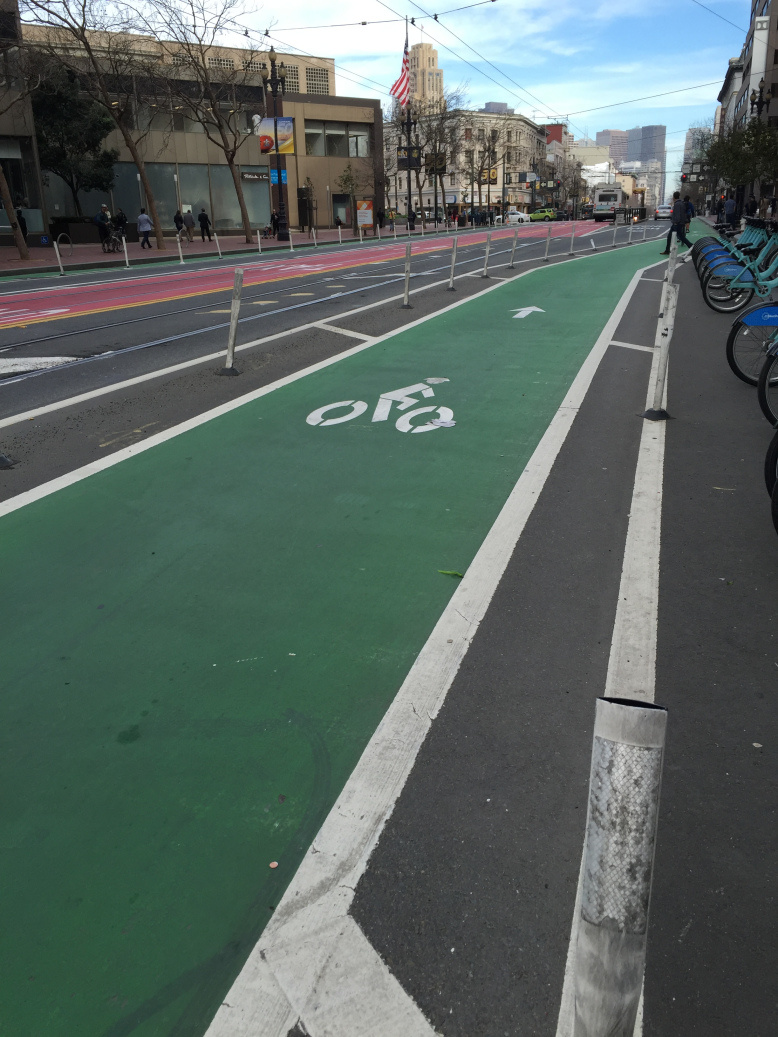 Now back to my impressions…

It’s a thing here. Aside from the inevitable discussion with locals about the crazy high cost of rent, the topic of grocery shopping at the infamous Berkeley Bowl was a close second. They have an east and a west location. The original location was in a converted bowling alley which is where the name comes from. We were closer to the west one so that’s where we went. 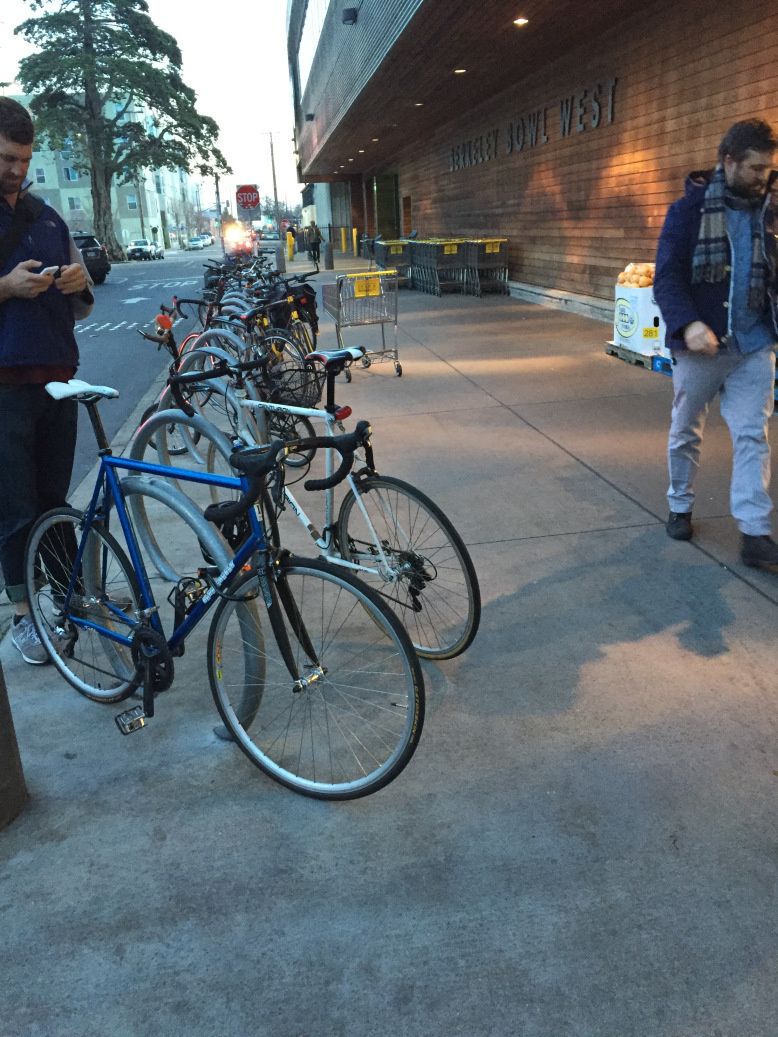 Great store, they are independent and have a solid selection- especially the bread we had. Best way to describe it would be the size of a Jewels (one of our larger grocers in Chicago) with the vibe of a food coop and organic/natural products of a whole foods. They are able to attract a faithful following by putting out great products at competitive prices. Duh.

When we told our friend we were heading there she was excited for us and couldn’t wait to get our impressions on the ‘experience’. My interest was peaked, how can shopping at this store be such a big deal? I was also interested because I worked for a smaller family run grocery store growing up.

It was relatively calm and uneventful but we were there on a weekday early afternoon. While walking around the store you got a sense that the customers were sort of in their own little world there. But, I think you can say that about customers in a lot of stores, grocery or otherwise.

While I was checking out I overheard a comment from the customer in front of me to the cashier about how strange it was that it is was so calm. This was my first clue that the Berkeley Bowl ‘experience’ existed.

In the ensuing conversations with locals about Berkeley Bowl we heard varying thoughts about what this cultural phenomenon was all about. The general consensus was that the majority of shoppers who go there can be stand-offish, anti-social and in their own little bubble. Very little eye contact or friendly ‘excuse me’. Some told stories of people ramming your cart with theirs to get yours out of the way or pushing their cart into your ankles and not apologizing for it. All very civilized behavior…

I did a little internet search to dig deeper and came across this LA Times article which I think explains things a little better. Next time we are in Berkeley we will be sure to shop on a weekend to get the real Berkeley Bowl ‘experience’.

Bikes on the BART

The BART (Bay Area Rapid Transit) is the local commuter train that connects the east bay with the city. It’s fast and it’s clean but it’s not cheap. Our ride from SFO airport to Berkeley was $10 (fare is based on distance traveled). Which is a lot compared to the flat fare of $2.25 on the CTA (although I did just discover that it’s $5 to take the CTA blue line from O’Hare. It’s still the normal $2.25 from Midway though, not that I needed another reason to prefer Midway over O’Hare).

During that first BART ride, I noticed at least 10 bikes on the platform or on the train cars. There are no restrictions on when you can or can’t bring a bike on the BART. This is a big point of contention with the folks who commute by train since the bikes take up a lot of space and people will bring them on even when it is packed like sardines.

I’m about as pro-bike as they come but I can certainly sympathize with this frustration. Getting on and off of a packed train is not fun and it’s just not practical or considerate for someone to have their bike on it. One way to squash this beef is getting a folding bike. Another, and one that clearly is utilized, is going multi-modal and riding your bike and locking it up at the station. The North Berkeley BART station was loaded with bike parking and from what I could see it was almost completely full. 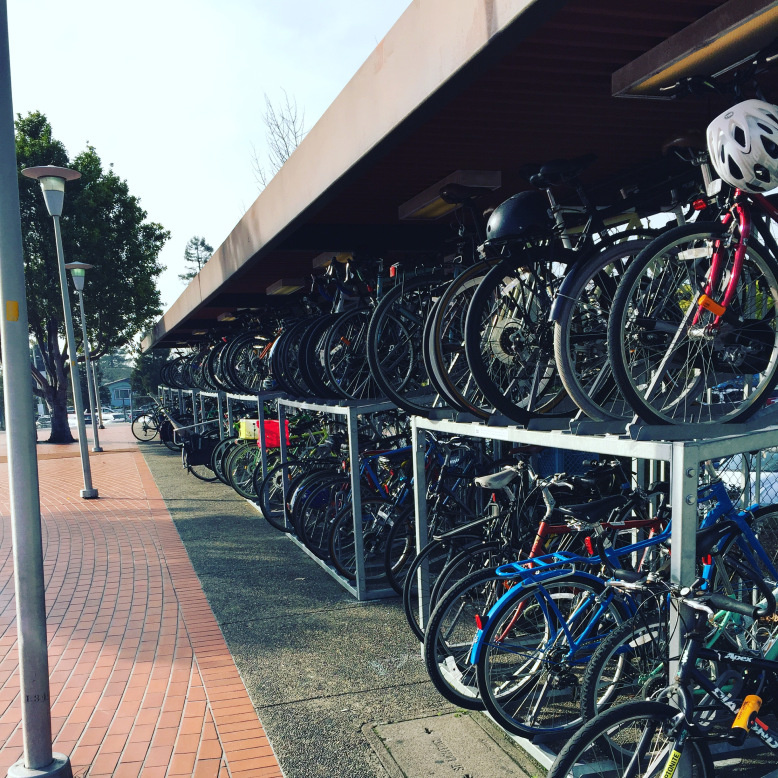 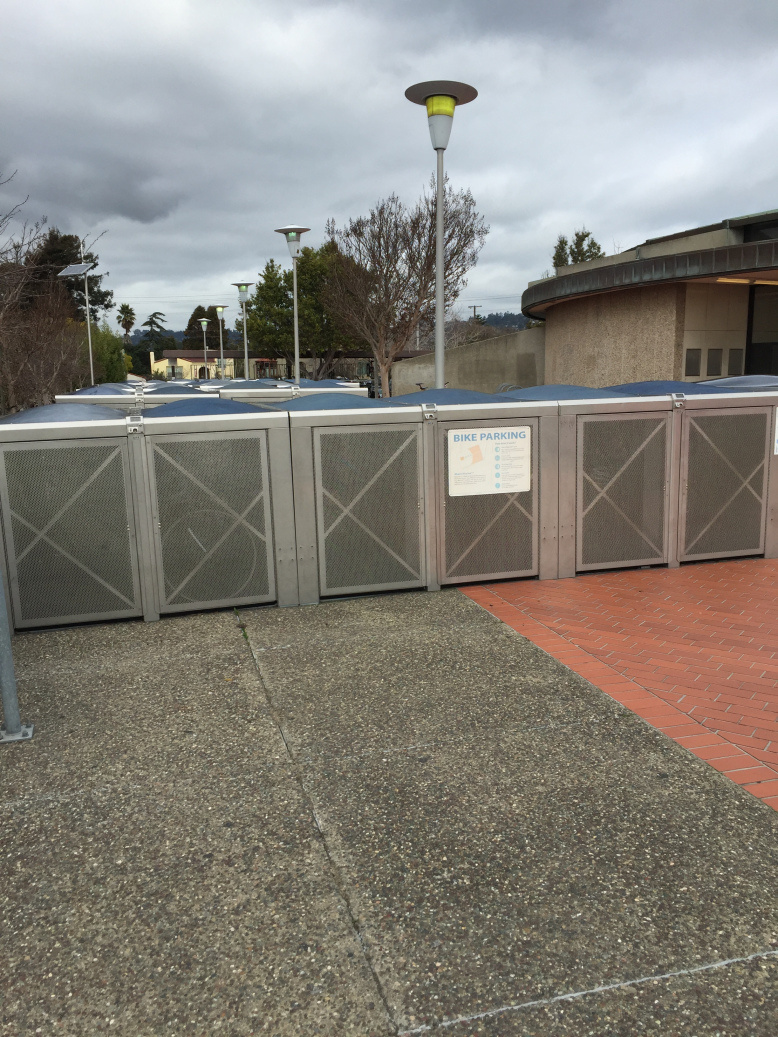 I always try to visit as many shops as I can whenever I travel. Here is a list of the shops we checked out on this trip:

California was the first state to ban smoking in bars and restaurants in 1995. That’s 3 years before it was banned federally on commercial flights and nearly 13 years ahead of when Illinois woke up and passed a ban.

There is a strong connection to the planet here which makes sense since they are surrounded by incredible nature in every direction. In Berkeley, everywhere you turned people were composting and recycling. 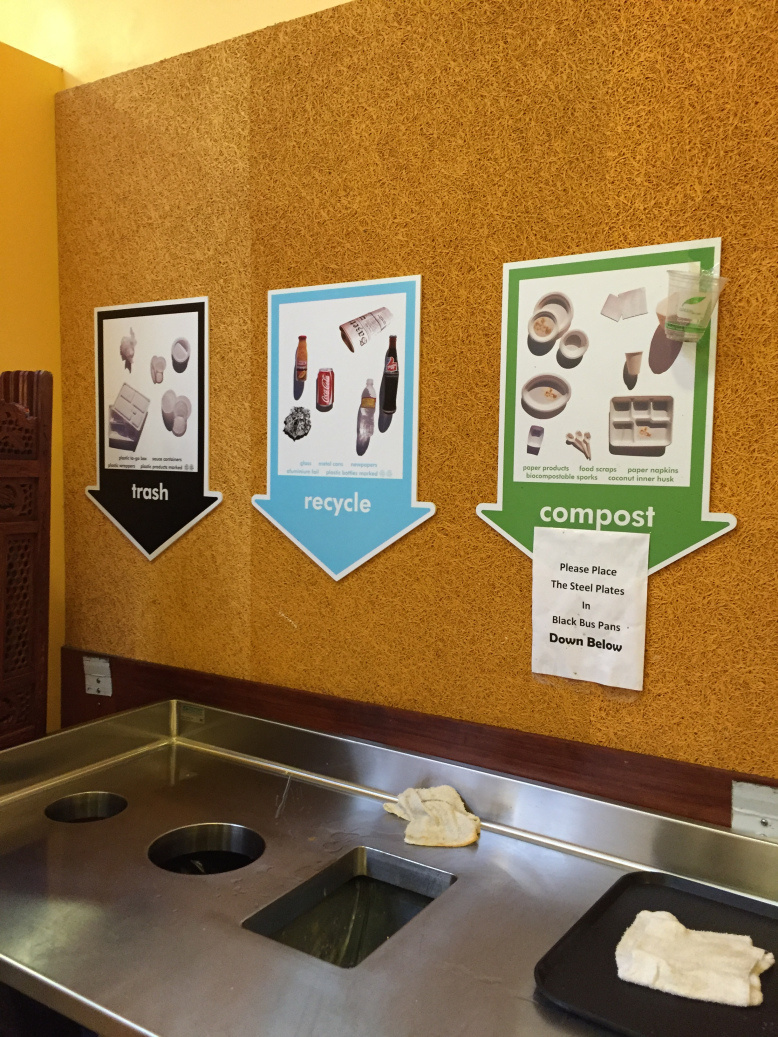 Vik’s Chaat House in Berkeley. Delicious Indian food. Composting & recycling was like this at every restaurant we went to in Berkeley.

I guess my point here is seeing as California was ahead of the curve on the smoking ban, my hope is we will follow their lead on composting before too long in Chicago and other parts of the country.

Composting is not easy for vast majority of city dwellers. However, there are now local businesses all over the country who are helping make it possible. These guys, Healthy Soil Compost, here in Chicago will even bike to your home to pick up your compost. I haven’t used them but am planning to start up a subscription this spring.

Pedal People, in Northampton Mass, takes it a step further and even does curbside trash pickup by bike.

We feasted on some of the best sandwiches you’ll find anywhere at Lunchpad in the Hayes Valley neighborhood of San Francisco. They have a unique concept in that they are a daily pop-up lunch spot who leases out the kitchen and dining space of a wine bar that operates in the space in the evenings.

It also happens to be owned and run by one of my cousins. Yeah I’m biased here no doubt, but I honestly would put their sandwiches up against any others anywhere. They do catering so anybody in the area who wants to impress their co-workers or clients with these fantastic sammies, you won’t be disappointed. 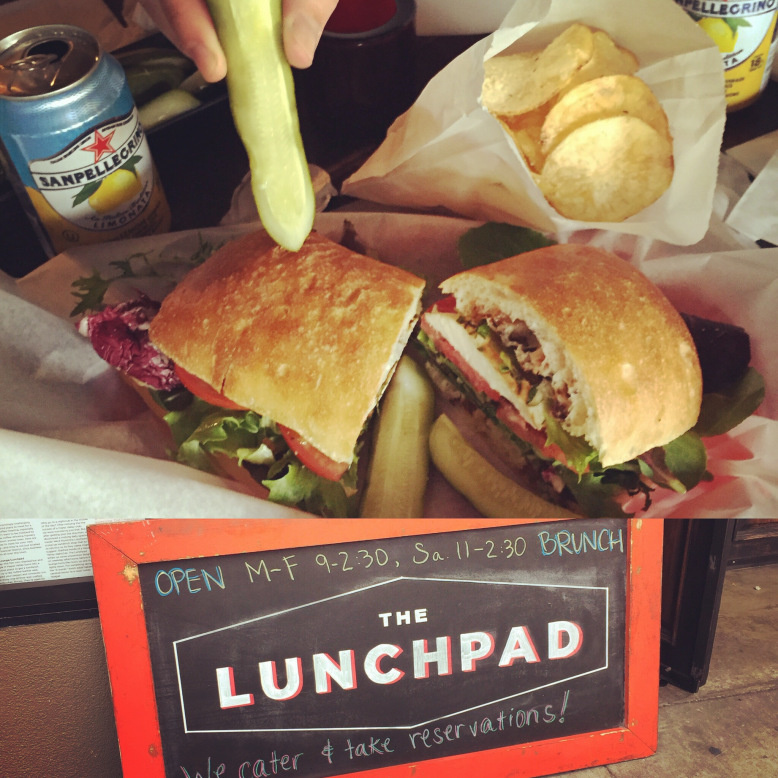 The Turkey Drizzle- roast turkey, habanero candied bacon, Swiss, cashew pesto, caramelized onions, giardiniera, greens, tomatoes and a drizzle of balsamic reduction. It’s all that and a bag a chips! Plus you get some of our Grandpa’s famous pickles on the side.

After stuffing our faces, we wandered the area and came upon a little parklet that had a handful of businesses built inside converted shipping containers. There was a coffee shop, a juice bar, an ice cream parlor and a clothing store. They also have a large movie screen for showing movies in the park. 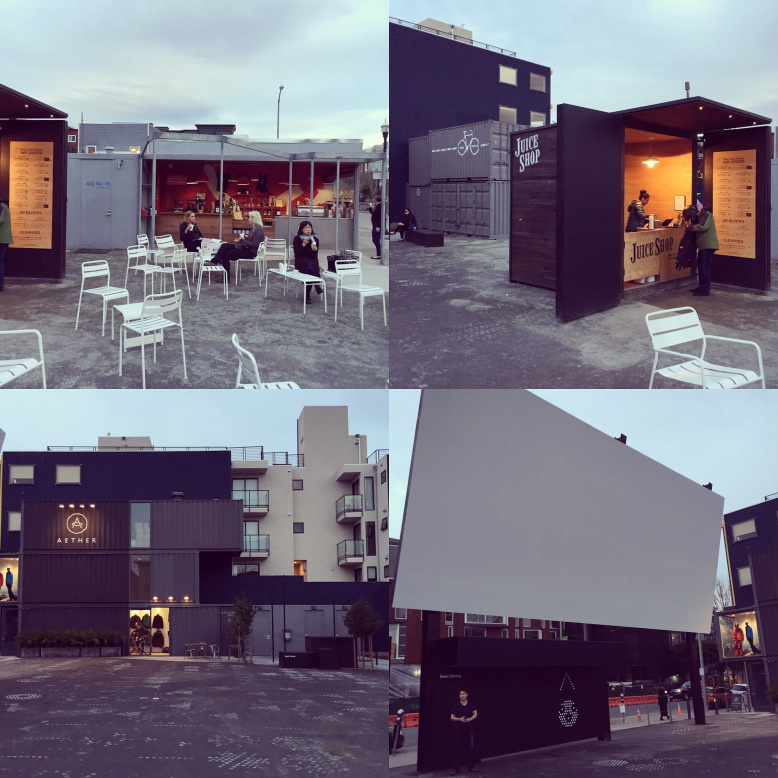 We rented a few bikes from CityRide Bike Rentals in one of these aforementioned shipping containers. Extremely friendly staff here, they took the time to talk through optional routes for our three hour journey to check out the sights of the city. The bikes were well maintained and had plenty of the needed gears for mashing up hills. There were a few times though that I was wishing I had my Brooks saddle, next time I’ll BYOB. 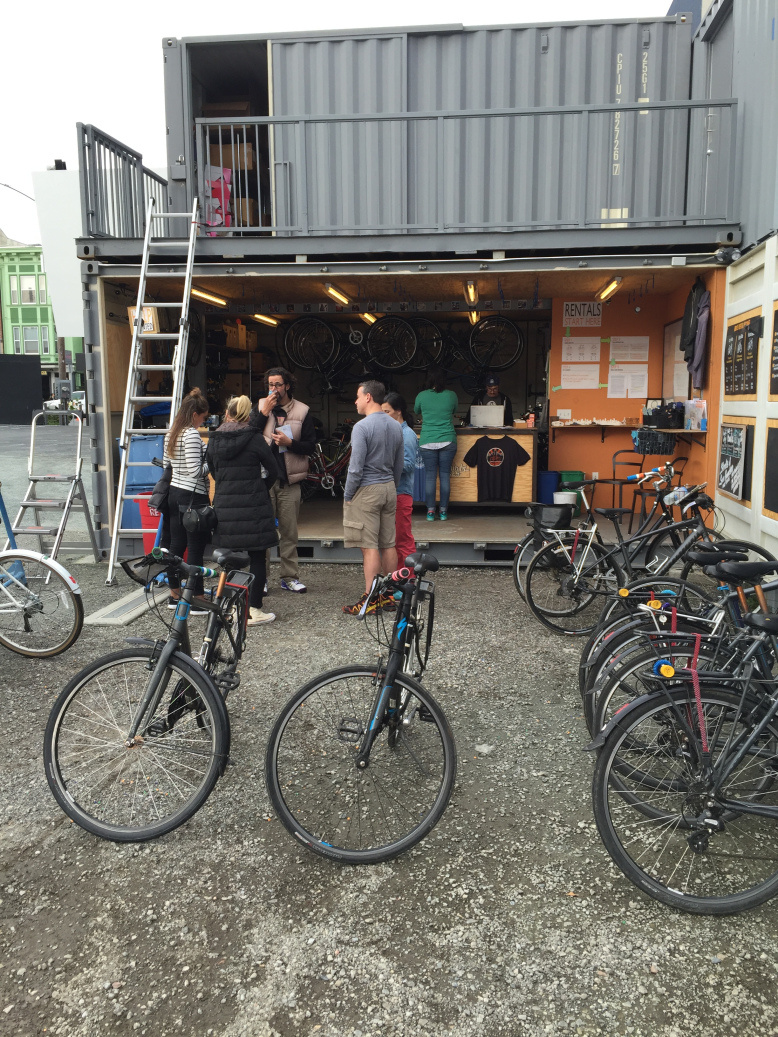 I’m happy to say my life is firmly planted in Chicago with no intentions of moving anywhere anytime soon. However, if I was looking to move, Berkeley and the bay area would be tops on my list. If only the rent wasn’t so damn high!