A bicycle is a tool. It's a tool that we at J.C. Lind are kind of obsessed with and think is really a fun and efficient way to get around. But like any tool, you must be taught how to properly use it.

In high school I made somewhat of a name for myself simply by riding my bike to school. Can you imagine the kind of school where doing this simple thing would bring me notoriety? A suburban school on the edge of a cornfield in northeast Indiana. Almost no one rode a bike around town, least of all to school, where whether you had a car, and what type, was a definite status symbol. However, somehow (inexplicably) it was also a status symbol if you were different. Not in a weird way, because kids who were different in a weird way were penalized (via swirlies, purple-nirples, and the ol' fashioned getting shoved into a locker) by the high school social structure. 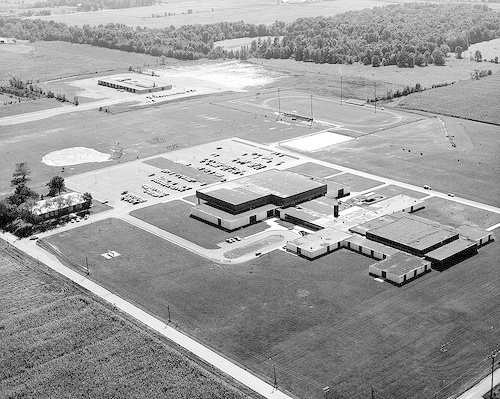 It was a thrilling high school experience for all involved.

But if you were different in a way that turned heads, in a way that showed you were so confident in yourself you would do something so irregular, so against the grain and be so nonchalant about it, if you were different in that I'm-wearing-tight-spandex-and-I'm-confident-in-my-sexuality/masculinity way (because that's how it was interpreted by high school kids back then), well... that was status you could attain without good looks or a cool car (and believe me, I did not exactly have those). 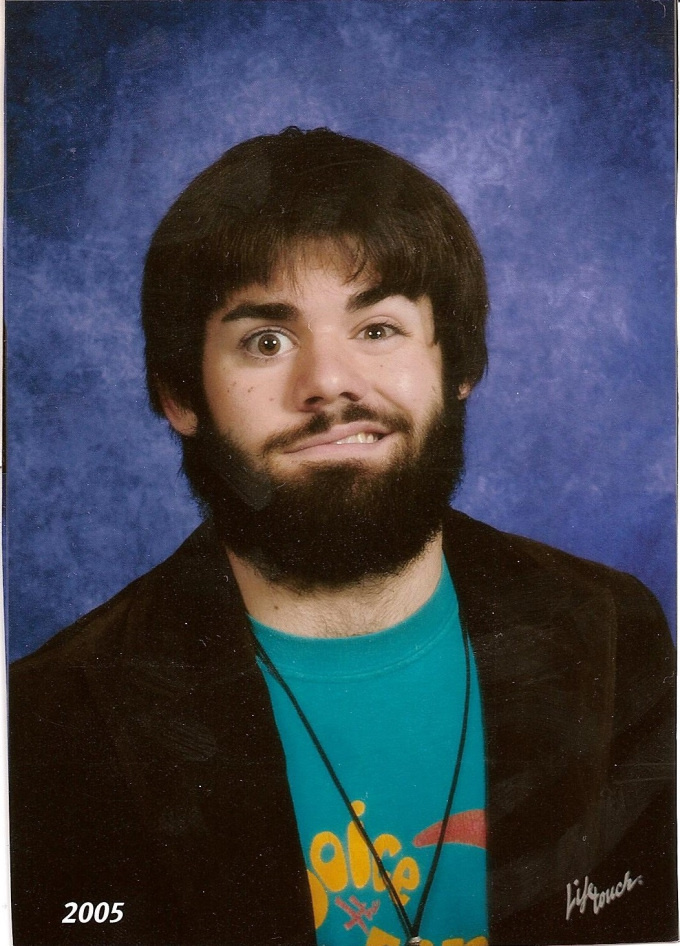 The esteemed author in one of his finest displays of dividing his face into two distinct expressions. (Actual school photo)

What the other kids didn't know was that I wasn't confident, wasn't nonchalant, and wasn't even comfortable in my sexuality (because, like who is in high school?). What I was, was thoroughly insecure and totally eager to receive the praise and adulation of people who thought I was all those things. And hearing them tell me I was "badass" or a "beast" or "so manly" because I biked during the winter was a particular delicacy for my adolescent ego. It would also be my undoing. Well... for a time anyway. In my case, I didn't fly so close to the sun that a fall proved fatal, but I shall return to the story.

I was a junior in high school, maybe a sophomore, I can't remember. But I'll never forget waking up and seeing the devastation that had occurred while we all slept. Indiana weather had done it again. Freezing rain had poured in the night and frozen solid so that every surface exposed to the elements had a 3/4" layer of ice on it. Trees, their branches laden too heavily with the weight, had dropped limbs, in some cases splitting right in half. Car windshields were beyond scraping, a heating element of some kind was needed. And, of course, the roads were atrocious. The city's streets had been transformed into a linear skating rinks overnight. 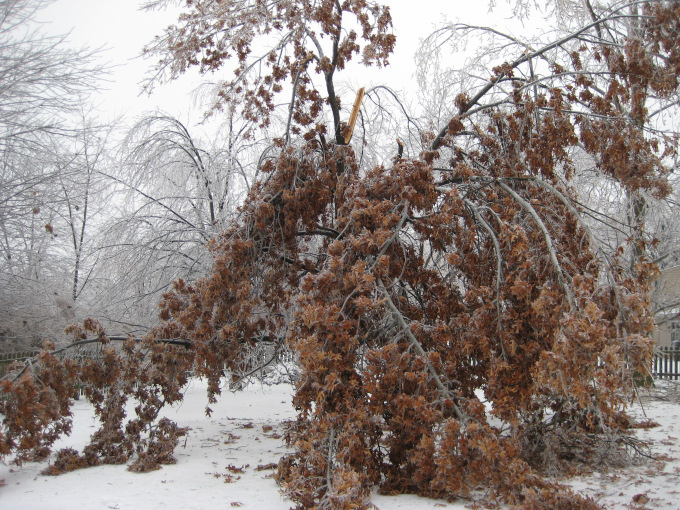 The esteemed author's actual back yard at the time. Yeah, when the weather's taking down oak trees you better rethink your tactics a little.

Naturally, my reaction to all this was to think Imagine what they'll say of me when I stroll in to school after dismounting my bike! Just imagine! They'll be in disbelief! They'll sing songs of the day one environmentally conscious student rode his bike to school, the harsh weather be damned! I'll go down in history! Maybe I didn't think those words, but I sort of felt it, intuitively. My suffering ego knew that if I completed this Herculean task it would be fed what it longed for: affirmation. I was like a drug addict for compliments (but again, like who isn't in high school?).

Somehow I managed to convince my parents that this was a good idea. I'll just skip over that part since I'm not sure how it happened (then again, I was very stubborn and argumentative at this time, too). Back in those days I didn't know anything about bikes that had racks for cargo (I wore a backpack), fenders, thick, durable tires, or GOING SLOW!!! (AMIRITE, BROTHER?!?!) Going slow was for noobs. Still, I wasn't 100% stupid, so I at least knew to be cautious on the ice.

I was slipping all over the road and doing everything in my power to steady the bike, sometimes even riding with one leg out, ready to catch me in a tripod if the bike slid out from under me. I was also sweating like a Coke bottle at an August barbecue because: layering clothing + panicking + adrenaline/trying not to die = massive sweating.

Finally, I just had three turns to make before I was safely at school. The third to last turn was onto a busy-ish road. I remember having exactly zero time, which is to say there were 0.00 seconds of elapsed time between my feeling of being slightly off-balance and then instantly being on the ground, face first, bike still attached to my feet. A valiant, yet feeble attempt at breaking my fall was made by my right arm, collapsed under me, and my backpack's extra weight made it hard to push myself up and then--OWWWW!!! %*&#[email protected] THE HELL WAS THAT?!?!! I tried to push myself up agai--OWWWWWWWW!!! My ribs reeeeaaallly had gone down hard on that ice pavement. 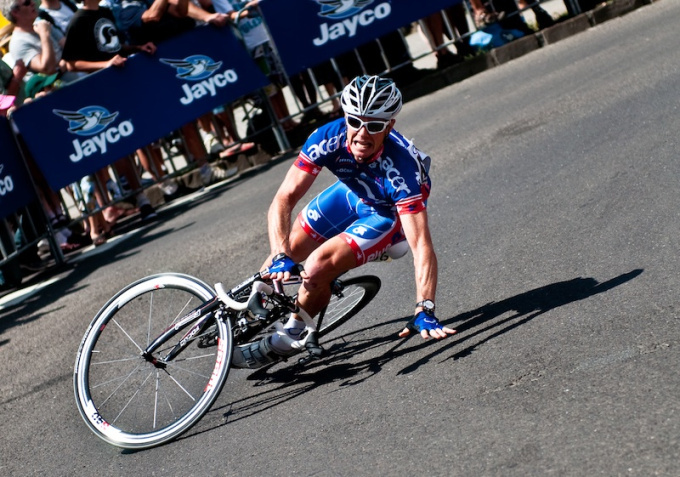 ...only now imagine that the arm was less muscular and it didn't have time to brace the fall.

I finally managed to unclip my shoes from the pedals and roll over onto my backpack, and use my arms to push myself up that way. The clock was ticking. My chest was throbbing. I had no choice. I was a teenager, and no adult was going to help me, or hold me back from being "badass" in the eyes of my pears. Wrist and chest stinging, eyes burning, I somehow mounted the bike again and gingerly began to pedal. I clutched my ribs with one hand and rode about as slow as you can go on a bike and still call it "bicycling."

The last 800 meters were like that. I made it to school. I gritted my teeth. I hid my pain. I heard the incredulous, impressed remarks of my peers. I might have even smiled, but inside, I knew. knew that I had betrayed something elemental. I had misused a tool of the gods for sport and my own amusement. Like Odysseus, I would be hunted by Poseidon. Like Icarus, I fell from the sky. And it was so. That particular failure was so internally humiliating and traumatic, that I didn't ride my bike in the winter for a long time. Maybe a few years. I rode my bike, sure, but if there was even a smidge of moisture to be found, my ego had learned it was better just to be like everyone else. Try to fit in. Be safe. Drive instead of ride. 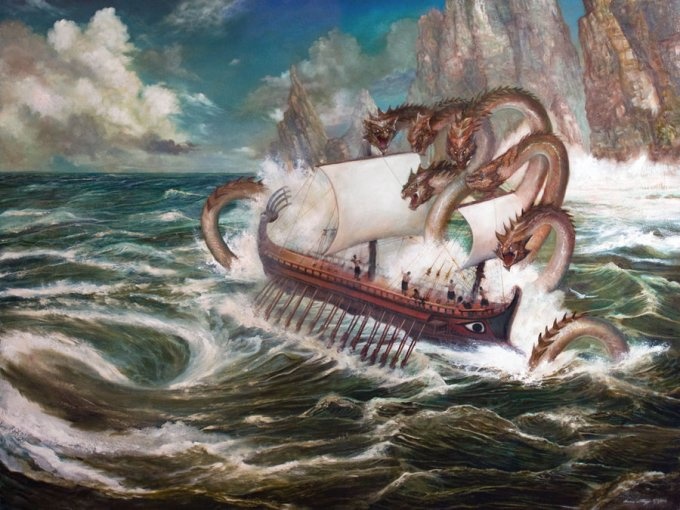 You have angered the gods. Scylla and Charybdis aren't stoked about you either.

Some of you might be thinking "this does not sound like the Keith I know and love," but remember, this is something I felt and thought long ago. And honestly, I'm glad it happened! Like my younger self, I think we tend to be afraid of showing that we are weak, or need help, or are wrong. But I'm glad I made that mistake (and I'm lucky it wasn't anything more than some bruised ribs/ego), because it set the stage for future learning.

I learned 1) nature is powerful and demands respect 2) there are some bikes that can handle that nature much better than others (and I think you know who to ask about those) 3) there are ways to ride in winter to make one safer and mostly just 4) bikes are a tool, a really cool tool for getting around. They're also great for not polluting and causing increased greenhouse gases, taking up less space on streets than cars do, not causing collisions that kill so many people, keeping folks healthy by giving them a transportation alternative that doubles as exercise, among other things. Bicycles are all those things and more. They're tools for accomplishing all those things. They're also a pretty dumb way to try to feed egos (but then, what isn't?).

I may present as this “RAH RAH BIKES ARE AWESOME RAH RAH STOP POLLUTION RAH RAH HOW CAN ANYONE NOT AGREE IT'S SO OBVIOUS” persona from time to time, but it's not that obvious, to be truthful. I arrived at my current level of bicycle competence through chapped lips, bruised ribs, freezing fingers, late arrivals, in other words, lots and lots of failure. If it were obvious I'd have had all the answers all along and never screwed up.

Anyone who seeks a higher bicycling competence (or anythingcompetence) can expect that they, too, must fail. As many an inspirational poster has undoubtedly told us all, failure is part and parcel to learning. Failure (and the learning that comes with it) is also an important ingredient in humility, which isn't important for bicyclers specifically, but humans all around, I would say. So, go forth and let yourself be made a fool of and thus learn; I will do likewise.