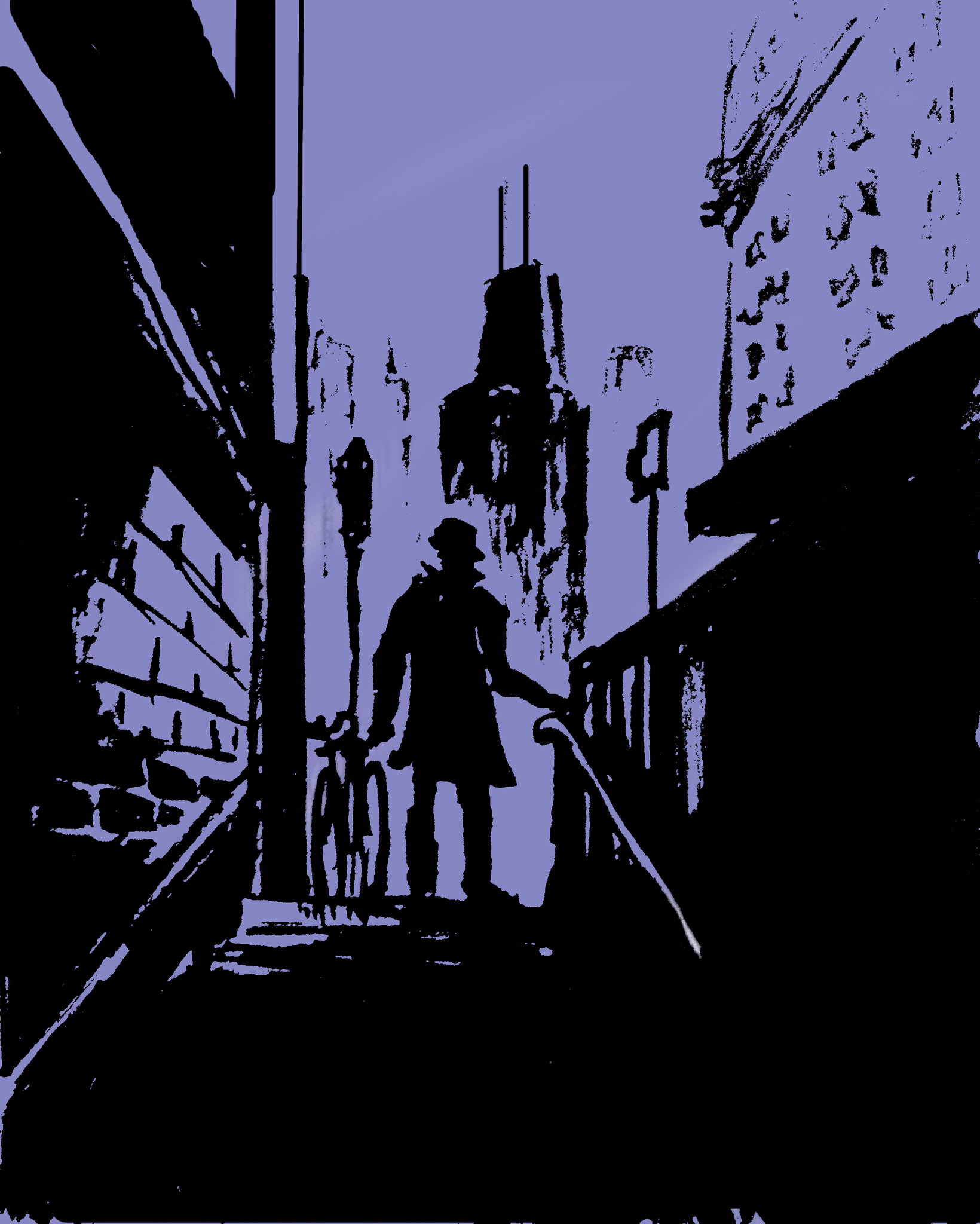 Chicago winter can be cold, they says. But they're usually talkin' about the temperature.

It all happened back in December. I was sitting alone at the bike shop, nursing a bottle of Jack and sweatin' bullets wonderin' what scheme I could come up with to afford my next meal. The bikes just weren't comin' in; the cold had scared most folks off the streets. Leastways, offa two wheels. Heaven knows you can't avoid the streets in this town. So there I was, the bikes weren't comin in, but the bills sure were. And just as I was about to open a new bottle, she came in the door. 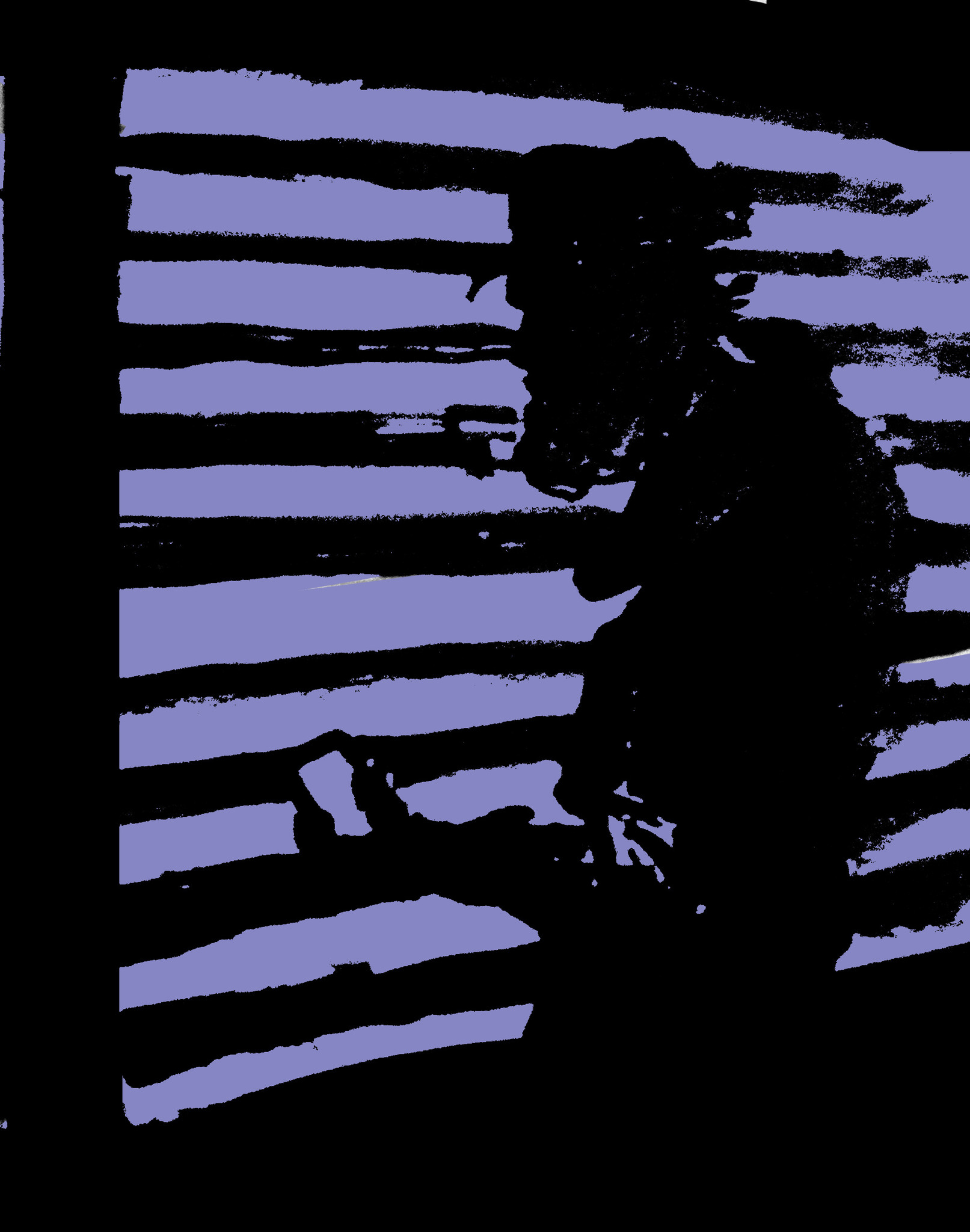 Plenty of dames had come to me before (and plenty of fellas, too) by which I mean to say, they'd come to me in distress. But this one had white on her face like it was rice, but maybe it was the cold. The point is, she was scared, trapped, stuck, and had no one to turn to... 'cept me. Well, she come in outta the cold with her bike, a nice cargo bike, the kind you buy to carry your kids an' all your groceries around town, same as a car. This was one helluva lady, I thought. Then she starts chattering hysterically about her shifter not working, her brakes not working. I take a look at em an' say, Lady, your brakes and shifter are fine. She looks at me bug-eyed and tries em out herself. She's incredulous, says they wouldn't budge just minutes ago.

So I start puttin' the pieces together. I was reminded of a case a buddya mine took on a few years back. He went mad, so mad they threw him in the loony bin, talkin' 'bout frozen cables, couldn't shift or brake with frozen cables. I shuddered. Somethin' about the whole ordeal made me wanna book a train straight to Florida and hide out there, never show my face in this town again. But it was a coward's fantasy. I really needed to take this case. The bills an' all that. Plus I couldn't let this girl down, not her nor her little kids an' their cold rosy cheeks and cold little snotty noses. I told her I'd get to the bottom of it.

Was I goin' soft? I'd worked with a lotta classy dames in my time but with this one... I didn't even haggle on the price. In my line of work, in the back of my mind is always the thought that the next client in distress who comes in'll be the one who melts my cold heart. But back to the story...

Before she left I installed new cables on the bike, right after blowing out all the water that was stuck inside the housing, and then I lubed em up something fierce. I thought my problems were over and I was home free. It wasn't too many days before she came back, though, with her pretty brow furrowed and those dreadful words on her ruby lips, "It happened again." 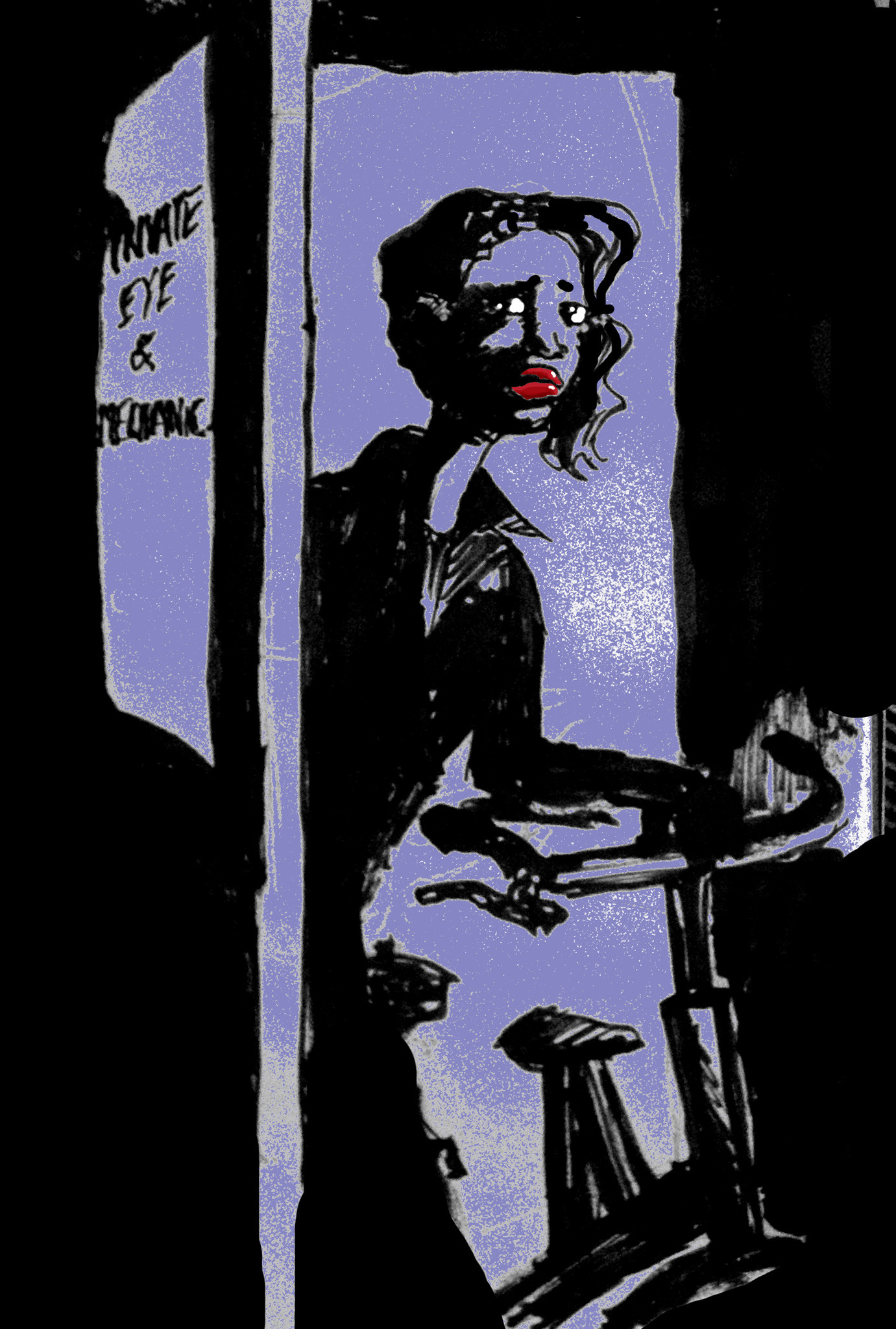 Over the next couple weeks I trailed the suspect: Cold. It wasn't easy, January and February came and weather was balmy, by Chicago standards anyway. The cold kept hidin' out in places I didn't expect. March? I mean, come on, who's counting on a cold snap in March? But then It'd disappear just as quickly.

Finally, the crook struck again. This time I was poised, ready to spring the trap to take It down. But as usual, things never work out quite the way I plan, but hey, I ain't no forensic scientist. I decided to stake out the bike and monitor the cable. It was a sleepless night, but the minute I felt that the cable had frozen, I cut it up, housing and all, into sections. I labelled the sections with numbers. I was in a frenzy, feeling like I was following the lead that would crack the case wide open.

After cutting off each segment of housing, I tested the cable to see if it moved within or if remained stuck. When I'd finally cut them all, I figured out where all the ice was, and I couldn't believe my naivete. The water had pooled in the lowest section of the housing. I shoulda known. Of course it would. Just like gravity had knocked me down and humbled me a thousand times, gravity had pulled the water down to where Chicago's mean, cold streets had frozen it, and I couldn't see it till the very end. 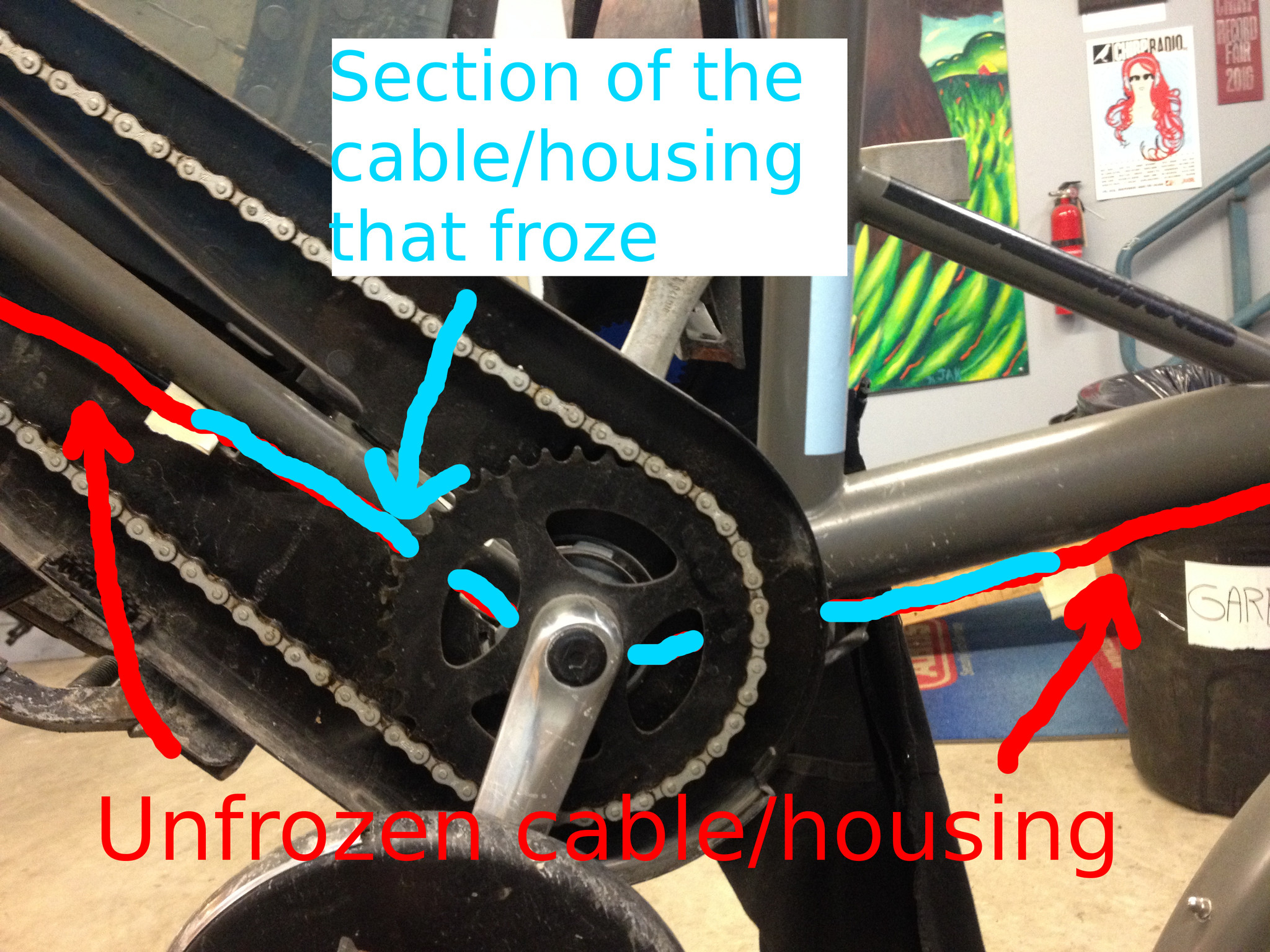 I ended up replacing both the cable and the housing, but so many questions lingered, unanswered still: how did the water keep getting in after I'd blown it out? What could I do to stop water from getting in? I wanted answers, but I was tired of using this poor woman and her bike as bait in my little scheme, not to mention, after daylight savings time hit, those sub-freezin' temps went into hiding, and my case went cold.

Spring is on the way, and folks are suddenly looking cheery and amicable again. But I'm still nursing this bottle o' Jack because I probably won't see that frozen cable for 8 months. I probably won't see her again either. I guess I should be thankful. She gave me a check and thanked me for all I did. She might be safe, for now, but I'll keep that file open, I'll keep it warm. When winter comes again, I've got a few tricks up my sleeve. 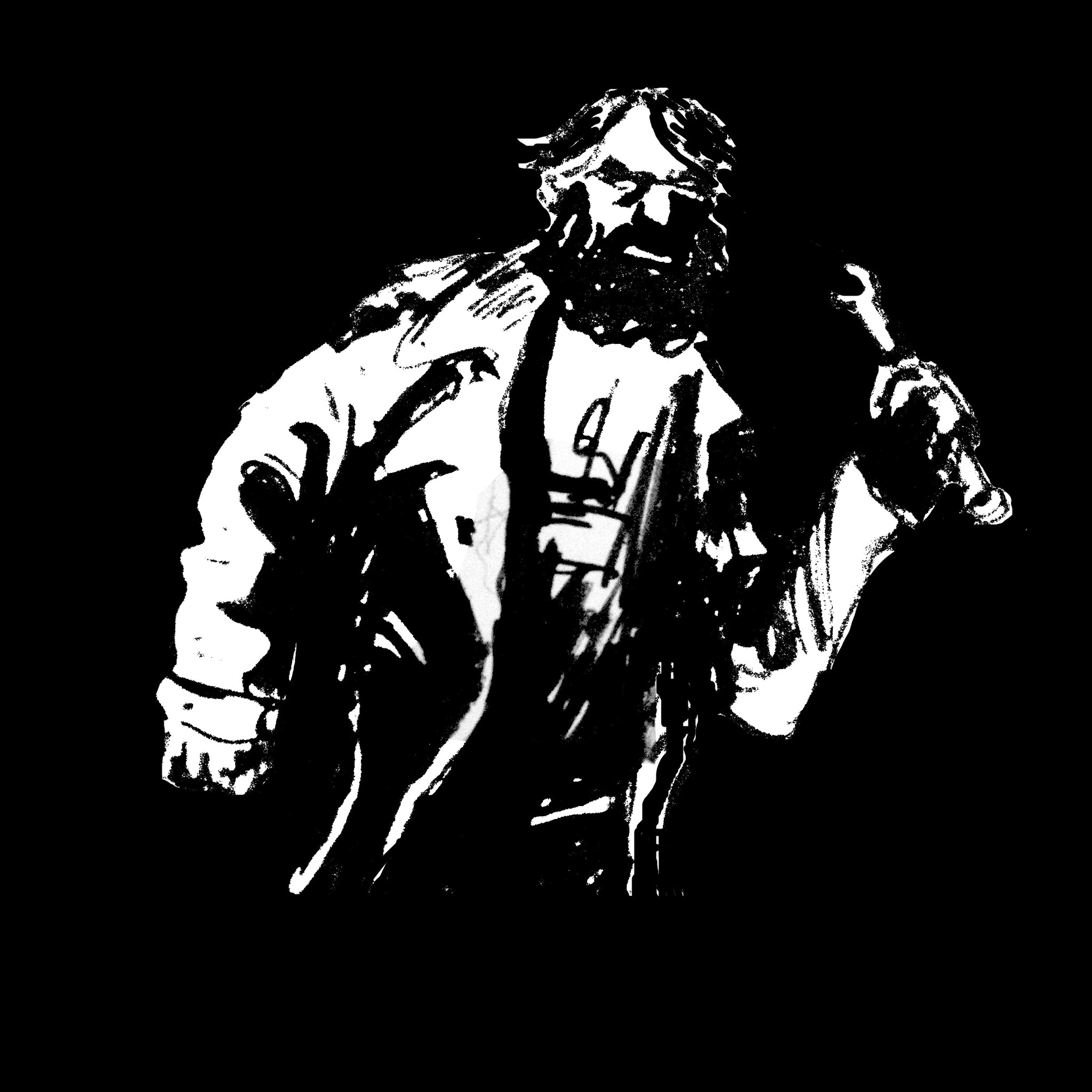