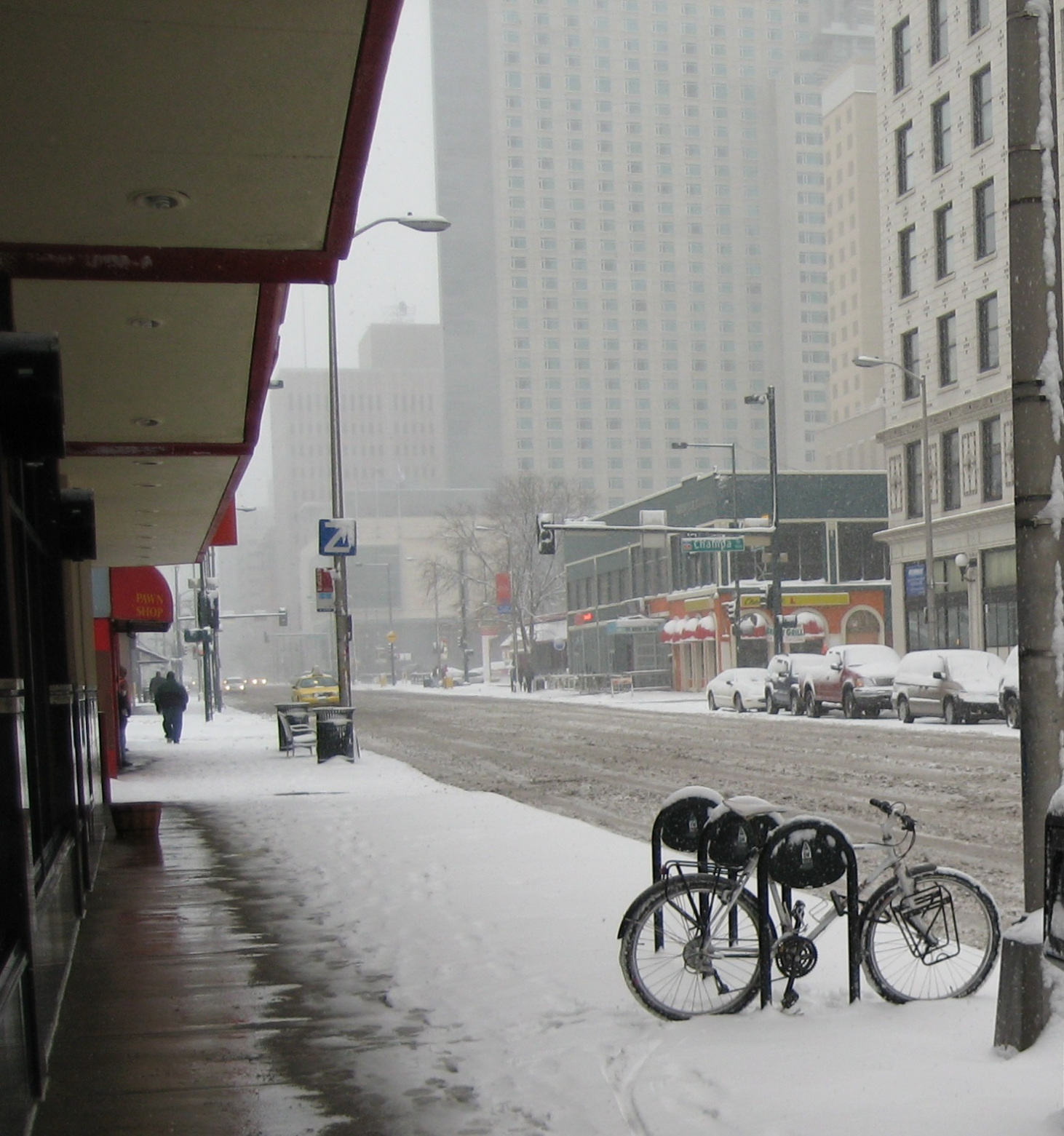 "In the bleak midwinter," a Christian hymn croons, "frosty wind made moan, Earth stood hard as iron, water like a stone." The writer of that particular song was a resident of Chicago (I'm almost 70% certain), because the description is spot on. I feel like most hymns, or Christmas/Hannukah/Kwanzaa music, and/or holiday tunes, or otherwise seasonal sounding things of any kind are supposed to comfort people. There are lots of religious and theological reasons (which I am not qualified to get into) people need to be comforted this time of year, but one of the most basic reasons is, duh, because it's darn bitter cold out. But remember, if you can, back to a time when comfort was probably the furthest thing from your mind.

It was January. School had been cancelled due to excessive cold and massive snowfall from the night before. It stopped the buses, froze 'em right up. But everyone knows that fourth graders are more durable machines than school buses. So you pleaded with your mom to go outside. (That's right, pleaded, can you imagine pleading to go outside in the winter as an adult?). After you showed her the exact outfit you would wear, she finally capitulated and then rushed off to work, having given you her blessing to play in the snow. So you bundled up.

First: the long johns. You were only four and a half feet tall, so the long johns weren't particularly long. After you'd snugged them over your wrists and ankles, you covered your feet with some of the thick, itchy wool socks your great-grandma had made way way back. You hated the itchiness but they were undeniably warm. Then you shoved your legs, artificially thickened by the long johns, into a pair of sweatpants with a hole in the crotch that had caused you a cosmic level of embarrassment in gym class earlier that week. With the long johns and socks on underneath, the sweatpants made you look like you were having a Hulk episode. You smiled. Yeah. You were having a Hulk episode. 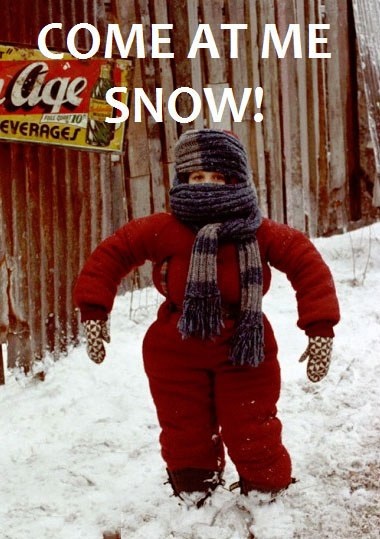 Over top of the long john shirt you pulled a sweatshirt on which your mom had drawn a train (of the choo-choo variety) with fabric paint. You were already well past your train phase by now, but it couldn't be helped. Finally, you climbed into the over-large, slippery, swishy snow pants and adjusted the suspenders over your shoulders. The woolen-stockinged feet were stuffed into tall boots, the kind with a thousand laces up the front. You zipped up your winter coat, buzzing with anticipation over the Hulking out that was about to happen. You put on some wool mittens. They were not waterproof. In fact, the snow stuck to them like no other. BUT, they were so darn thick it didn't matter. It would take hours for the heat to seep out of them. Then you put on a long, colorful hat, homemade by mom. It was a target for bullies because it had such a long tail with a pom-pom on the end and could be easily plucked from your head. But you wore it in defiance. Bullies be damned! You thought. I am ready to Hulk Out!

So you went to your best friend's house down the way. They were in the process of pulling up their final zippers and putting on their final hats when you arrived. You were ready. Ready for the Hulk Out. You both walked to the park. Some younger kids were sledding on the hill. Some others had started to build a snowman. A few others had started constructing a fort. You knew some of those kids so you went over to assist in the fort construction. That's precisely when the ambush occurred, totally unprovoked. A snowball, thrown with a combination of precision and cowardice, from a hidden location, pelted you in the nose. 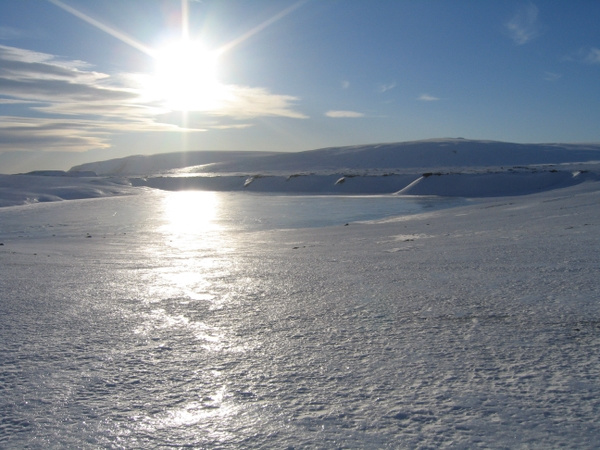 For a minute your face just stung and you could only smell blood, or something else, like cold nails being shoved up your nose. You feared that you were crying, or that it looked like you were crying. It was really just the cold, wet on your face and your eyes squinting against the sun's reflected light off of a pristine field that would have made Antarctica jealous. But the others didn't know that. The bullies probably assumed you were crying and fearful. But you were angry. And the bullies were not gonna like you when you were angry.

You took in a breath deeper than the deepest pond and raised your eyes to the heavens and screamed a long, throaty scream, voice cracking several times throughout. Hulk Out Complete. You scooped up a handful of the white stuff and smacked it hard, condensing it into its pure crystalline form with your other hand. With squinted eyes you scanned the horizon, peering just over the half-completed battle station. Your friends backed you, looking in all other directions for any sign of the offending combatants. Then you saw movement in the trees at the edge of the park. The bushes. There were bodies behind them. You made three more snowballs and stuffed them into the threadbare, busted-zipper pockets of your coat. You adjusted your long colorful hat--the emblem, your flag-- on your head. 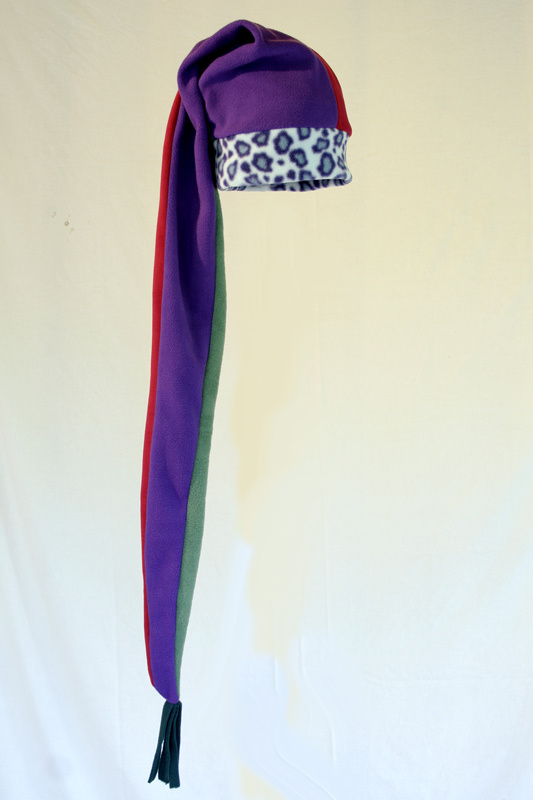 a) A target for bullies b) a perfect example of 90's winter fashion c) totally unnecessary but rad (source: www.themouseworks.com/images/HAT-PHOTOS/Tall-Stocking/long-stocking-lepard,-purpl.jpg)

Then, finally, slowly, you rose, full of prideful insurrection, from your crouching position. In your heart you knew this moment would cement your status as a legendary neighborhood hero forever--challenging the older kids. Two more snowballs flew at you but missed wide. You raised your throwing arm over your head, brandishing your snowball and charged. All your friends followed behind you, launching snowballs at will. Your feet pounded into a foot's worth of snow, sending little clouds of diamonds swirling from your legs in a furious, frosty hurricane. You were going to throw your snowballs only when you saw the whites of their eyes. You were not concerned about the cold. You were not concerned about your comfort. You wanted this.

Okay, firstly, I recognize this story is in no way universal. Maybe you grew up where it doesn't snow (I pity you). Maybe your parents didn't let you go out in the snow to play or you were raised by grandparents. Maybe you didn't have bullies. Maybe you were a bully, I don't know. Your upbringing could differ from this in any number of ways, but this story serves to illustrate how it is possible to feel about the winter and the cold. A lot of kids have this ability, but it's almost like we lose it as adults. What happens? I don't know, but I will say that the key to riding your bike all winter long is to tap into your inner snow-child-Hulk.

The cold is the single biggest impediment to people riding their bikes year round. Even many avid, hardened bicyclers hang up their helmets when the temps drop below 32 degrees. But kids know the secret to making their lives their own adventures.

When you think of winter bicycling as an adventure then every day becomes an adventure. Furthermore, the adventure makes the pain of the cold go away. Take the mundane and agonizing idea of riding your bike to work in the cold and imagine you're in Star Wars: The Empire Strikes back on Hoth riding one of those kangaroo-ram things (Tauntauns) trying to save Luke Skywalker. Play the music in your head. Make yourself become the hero of your own story. That's the way kids do it. And, if you're biking with your kids on your bike with you, you'll be teaching them to have an imagination (which is awesome in ways much bigger than managing to ride your bike through the winter). 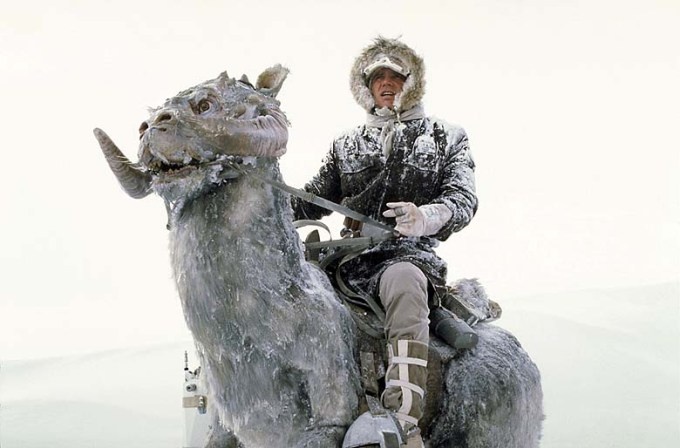 At least bikes don't smell bad, on the outside. (source: www.jedidefender.com/collect92/hothhan_esb.jpg)[/caption]

When winter rolls around and rears its ugly, abominable head, it feels like getting an unprovoked snowball to the face. But the answer isn't to cower and go home to the warmth of home or a heated motor vehicle. The true answer is to be abominable back. Stand up to that bully, Winter. Do it with style, with swagger, with story, and adventure. Convince yourself that you're an invincible hero, and chances are... you'll become one.