I used to work at this bike shop in Denver, Colorado that, like J.C. Lind, also sold city and cargo bikes. It was my first bike shop job and the business was just starting out as I was just starting, therefore we all really loved it to death, made some sacrifices for it, and put a lot of ourselves into it. Sadly, the business had a good run of five years and now no longer exists, which just breaks my heart, but that's kind of the crapshoot of small, brick-and-mortar retail businesses.

While we were in business though, we fixed a lot of flat tires. Sometimes it felt like those legions and legions of $6 tubes + $8 in labor kept the lights on. It probably wasn't just our bike shop that was doing so many though. I might venture to guess that in Denver specifically a lot of flat tires get fixed. In my estimation, the biggest reason for this was goat-heads. Now, people in the Midwest don't know what goat-heads are because the plant that makes them grows out west. They're little thorns that have four or five points on them, and they look like tiny, devilish goat heads (hence the name). Because of all the points they balance so they always have a point sticking up, just like jacks from the bouncy ball game. 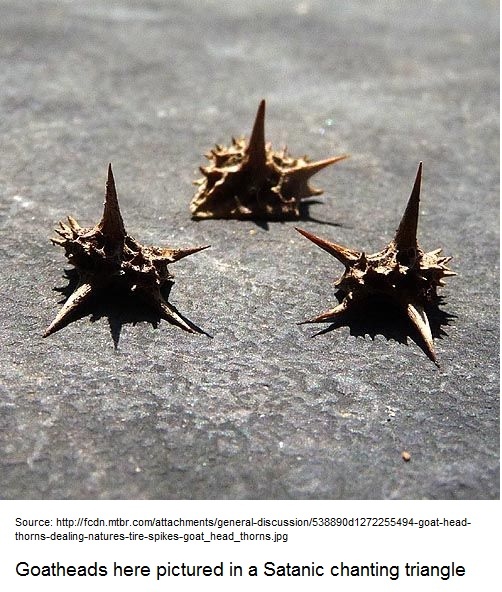 Anyway, the point is (pun not intended), these little guys alone were the abominable scourge of Denver's streets, for bicyclers at least. And as a result of them, we fixed a lot of flats. In one day, we fixed twenty-five flats (twenty of them by yours truly). Maybe that's not a big number to some bike shops, but mind you, this was a business with two, occasionally three, employees working. However, despite the annoyance of the near-constant hand-dirtying that is fixing flats, one could argue that these little prickly jerks brought us a lot of business, and that should make us happy (as a business), right? Well, it's more complicated than that. Read on.

It didn't take long for us to notice that the concept Hey, flats tires are great! can actually coexist in the same universe as Awww, flat tires suck. It just depends on what side of the cash register you're on. But we as service employees (nay, we as humans) naturally don't want to make our livelihood on others' misfortune! Not to mention, a customer who comes in with a flat is also more likely to come in unhappy or disgruntled, and sometimes as a retail/service employee, that attitude gets remitted on to us, and we definitely don't like that. But, we did get revenue from flats, so wouldn't we be obligated to like them?

I mean, if we really didn't like flats then we would just sell a product that prevented them altogether, right? Just like if we really didn't like our customers having their bikes stolen we'd sell an unbreakable lock, right? Right? Or are we happy to sell cheap cable locks that can be broken and are even happier when bikes get stolen because it means people come back to us to buy a bike? It's a tricky, slippery slope to be on and it also exposes one of the problems with retail (and service) businesses like bike shops; that is, the problem with selling great products (and furthermore, the moral/ecological problem of selling stuff that breaks). 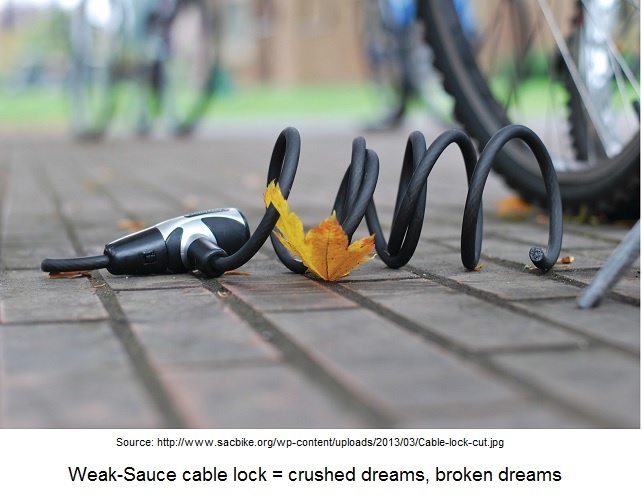 Let's say you're a bike shop that sells a tire that never goes flat, a bike that never breaks down, and a lock that is so tough nobody would ever be able to steal the bike it guards. Well, that would be awesome. But I guarantee you if you did that, the tire, the bike, and the lock you sold would be hella expensive. Prohibitively expensive for some. And the few you did sell, well, you'd never see those customers again! That's a pretty bad business plan. So you compromise. The question for all businesses like ours is how far?

I have to say, and I know I'm a bit biased, but at J.C. Lind Bike Co., we try to not compromise very much or at all when it comes to selling quality products; and let me tell you, this decision is not without its drawbacks. The Workcycles are a great example of a bike that is so hardy it can go years without service. Not the same as a bike that never breaks down, but it comes closer than any other bike I've had experience servicing and that's saying something. These bikes are not Bentleys, they are not just expensive because they have an expensive name you're paying for and the quality is the same as any other car. No, these bikes work. They work hard and take a lot of daily abuse and keep on working (makes you wonder why they named the company Workcycles?).

The toughest chain lock, be it Kryptonite, Abus, or the like, is pretty much going to deter any thief. It's not unbreakable, but it's going to be hard enough to break that most thieves will move on to weaker prey. Some bike shops sell that lock, sure, but they might sell a whole range of locks, great, medium-great, all the way down to utter crap. And as I've heard many a customer who's just had a bike stolen complain: "why would anyone sell a shitty lock?" Well, because it's hard to sell only the expensive, hardest-to-break lock and not go out of business.

And lastly the Schwalbe tire. Schwalbe is a German company that makes great tires, and the most bombproof, goat-head proof, tack-proof among them is the Schwalbe Marathon Plus. Again, not infallible, but pretty darn close. We almost unilaterally sell Schwalbes. We could probably sell a lot more tires if we had the weak, colorful ones that make your bike look snazzy and retail for $15 per. But we don't. 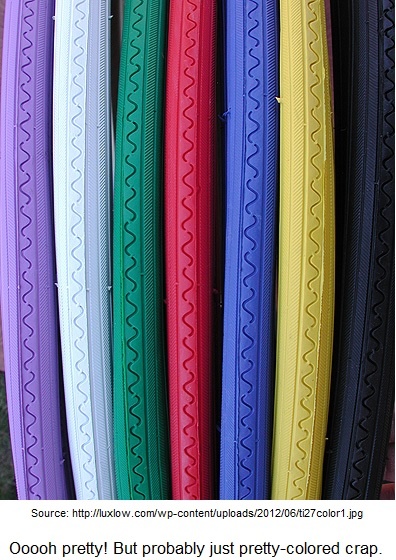 I can tell you the answer isn't some smug self-righteous belief that we're the best bike shop ever in the whole entire world. It's more like, as a business owner, or employee who's proud of his or her business, it gets harder and harder to answer the question I've gotten many times, "why would anyone sell a shitty lock/bike/tire/etc?"  We've adjusted the things we sell to reflect the things we ourselves use and believe in. The challenge for us is not to sell differently based on what keeps us in business, but to try to convince others that the cost of a great products is worth it... assuming you use it, that is. But still, the decision to sell those kind of products makes our job a lot harder.

The majority of bike shops sell cheap bikes, cheap lights, cheap tires, cheap tubes, cheap locks, and even cheap clothes. And I will be the first to admit, I don't know if that's a right or a wrong move (with regard to business success, consumer freedom, the environment, etc.). To harshly judge a shop's decision to sell inexpensive products that potentially wear out or break down is to ignore the difficulty of the struggle for bike mechanics and bike business owners to just stay in business. And how can you stay in business if you're selling only expensive stuff?

Americans are used to being able to get STUFF at low prices and have it still be good quality because our economy's the best and other, poorer people and countries make that STUFF. But the nature of that assumption about the world is changing. Still, Americans demand cheaper things from us. So many bike shops have to adapt to survive, and they capitulate to that demand. It's hard. We're just trying to survive as a business, but also sell things we believe in. That balance is difficult, no matter which side of the see-saw you lean on as a bike shop. 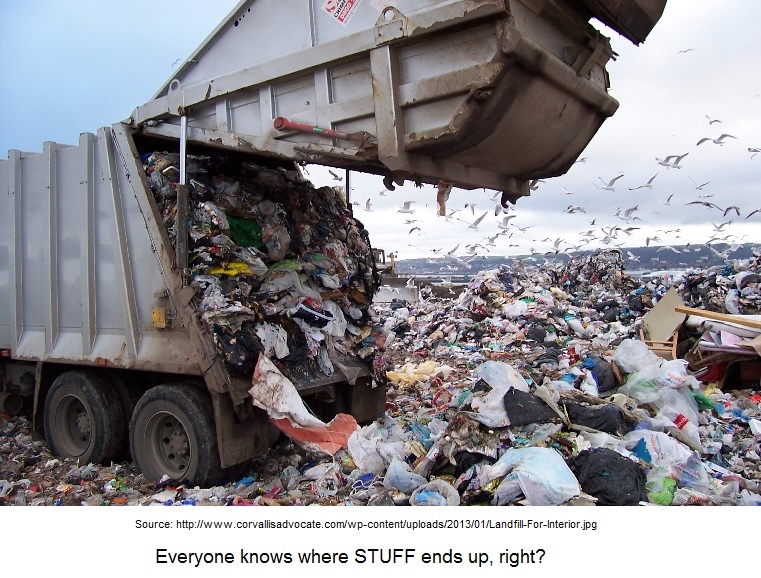 So how does J.C. Lind Bike Co make money (wouldn't you like to know)? We sell bikes that are objectively more money and low-maintenance and the concept of which (city riding, cargo biking, biking for transportation, not recreation) isn't terribly popular to boot. That's three strikes against us in terms of how to generate revenue. So how do we do it? Well, the truth is, it hasn't always been easy. Jon has made the business play bigger than it really is by directly importing brands and shipping them all over the country. In that way, the relative rarity and unpopularity of the bikes has actually been helpful. When you're the only game in town (or in the region, or the country) it gives you a solid feeling of job security.

On the other hand, it is getting easier and easier for customers to cut out the so-called middleman (us) and get bikes direct from a number of companies. I'll tell you, there isn't anything ethically wrong with this that I know of, but it pretty much only hurts American businesses like ours.

Our response at J.C. Lind has been to diversify what makes us special. The blog is part of that. We want to supply customers with something other than bikes and gear. Not that you're paying for it, but we're trying to expand so that this business delivers not just bikes, but our thoughts, our humor, our stories, the edutainment of the bike industry. For us, we don't want to adapt to the demand for cheaper stuff, we want to persuade people that the cost, the value of a certain bike only becomes expensive if you don't use it daily, depend on it, make it part of your daily routine, your family, your life. Instead of expanding the focus of what we sell, we're really trying to bring more people into that narrow focus.

It can be a little awkward as a retail employee to share with consumers the challenges and thought processes of how we choose to run our business. I, myself, panic about whether it might come across as condescending to some, self-righteous to others, or sarcastic to a few others. Despite those fears, we press on with this blog, and hopefully we've succeeded in sharing our experiences with as little condescension, pretension, and flippancy as possible. I want why we do what we do to be understood and I want to understand why our customers do what they do. I believe that our future as a business and our future as a sustainable, non-throw-away society, depends greatly on this understanding.