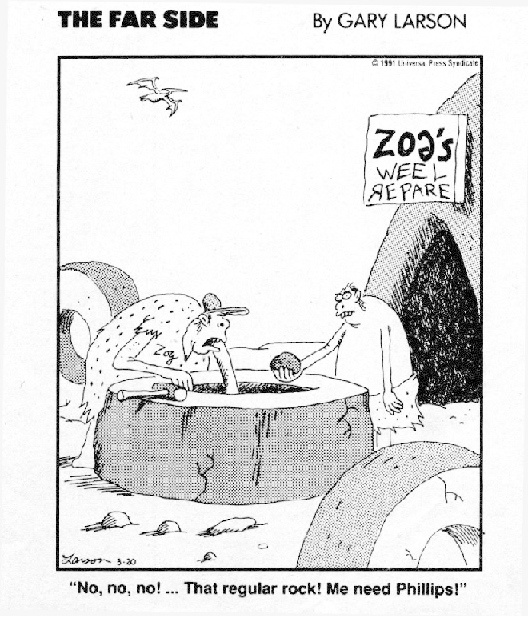 Have you ever been befuddled by the myriad wheel and tire sizes that exist for bicycles? Don't you wish you could just email every company and make them stick to one standard? And who invented the wheel, anyway? Shouldn't we have a monument to that person? And the people that came after that person and decided to make wheels in special "sizes" that were all different and unrelated to one another, shouldn't we vilify them? Today, on J.C. Lind Bike Co's learning corner, I will provide answers to approximately none of these questions, because they were all rhetorical (GOTCHA!) but I will be explaining some things and by reading further you will become even smarter and also might be able to whip out a great factoid at your next dinner party.

I've heard this mistake made many times, and I've also heard mechanics or bike enthusi-ass-ts correct uninformed customers in the most condescending way imaginable. Hopefully this article gets to you before that happens. If there's one thing I can't abide, it's condescending mechanics. But anyway, I think the reason a lot of people want to say "700cc" when asking for a tube or tire size is the same reason I think our tenth President was John Taylor Thomas. 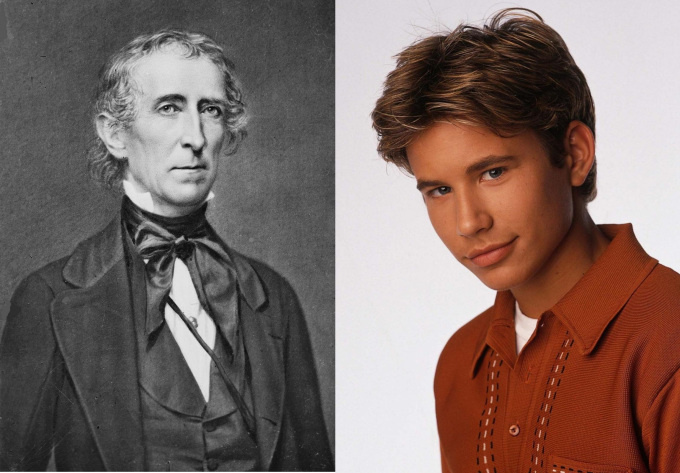 (1) John Tyler (left) and Jonathan Taylor Thomas (right), two actually different people, even though due to the slight name similarity my mind has trouble with this concept.

It's because when we hear something that doesn't make sense, we try to make it make more sense. The "c" in 700c is not a unit of measurement that we are aware of, it does not compute, so we assume maybe it's an error and change it to something that makes more sense to us in our minds. 700cc would be a metric measurement of volume. Tires are three dimensional objects that hold a volume of air. It makes sense. Why can't it just be sensible?! I'm sorry, but it's not. It wasn't sense, but messy history that named these things.

So why the "c"? What if I told you there used to be a 700A, 700B, 700C, and 700D sized tire (and rims that corresponded to each)? Yes. There used to be an even more maddeningly confusing number and diversity of tire and wheel sizes out there! It's actually gotten far more manageable, if you can believe it. You see, back in ye olde days, there was a lot of concern about tires+wheels having the same overall diameters. Racers would use thinner or fatter tires depending on the conditions. However, the only way to ensure that these differing widths would fit on the same bike was to make the wheel (the rim, for specificity) a different diameter for each size of tire. The goal, thereby, was that one person could have a quiver of different wheelsets, each one with a thin tire, a medium tire, a fat tire, and an even fatter tire, and yet they would all measure 700 mm in diameter (from the ground to the top of the rubber), allowing them all to be fit on a single bike. 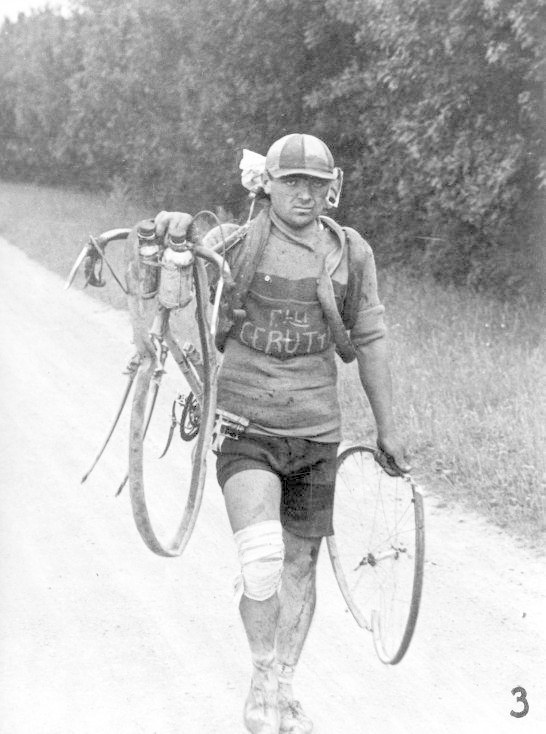 For example, 700A was a larger diameter wheel, 642 mm wide to be exact. This wheel was so big it did not allow for a very large tire on it (otherwise the overall diameter would be so large and the tire would likely rub on the frame of the bicycle, or not fit at all). 700B was slightly smaller, at 635 mm, and accommodated a slightly larger tire (the size of the tire corresponding to the letter "b"). 700C, the commonest modern wheel size now, was 622 mm and allowed for even bigger tires to be installed on it. 700D was the smallest rim at 587 mm, and it took tires that would have been larger than any of the other rim sizes but could still fit on the same bike.

700C ended up winning out over the other sizes. Why? We may never know. I'm guessing some internal Wars of the Roses type of deal, with the strongest clans (maybe 700C and 700B?) duking it out (see what I did there?) over the right to rule the bike industry wheel sizing. These days folks don't switch out their tires to sizes drastically different from each other, so needing an A, B, C, and D is pretty rare.

(3) I KNEW IT ALL ALONG. New archaeological evidence now supports my hypothesis about the true reasons for the War of the Roses.

It may also be because 700C was the most versatile of the sizes for some reason that escapes me but has to do with physics, general bicycle fit, and average levels of comfort. Of course, these days you see bicycles with 700C tires but the "C" doesn't really correspond to any tire width like it used to, it's more of an historical relic attached to the 700 as a reminder of its bloody past, like the vestigial tail that we grow as embryos. We know that it's meaningless because we see 700x18, 700x25, 700x32, 700x38, 700x45, 700x50, and even bigger widths than that these days. Only a few of those sizes would fit on the same bike. Today we're more or less okay with not being able to fit a wide range of tire sizes on our rims. If we wanted a bigger tire, it'd probably be because we wanted to use a bike for a different purpose, and so we'd just buy a bike that would allow for those tires to fit. Which brings me to the next size topic: 26" wheels.

26" wheels (that is, wheels with rim diameters of roughly 559 mm, although 571 mm is still found) have been around for ages, too, although I would warrant a guess that they're newer than the 700s. They really start to show up in the War Era (is that an Era? I'm making it one--the time immediately before, during, and after WWII). They were always made more for balloon type tires on beach cruisers or single and three-speed bikes for around town and going to the bodega. Because these bikes had lots of space in the frames, they could accept very large tires, with the idea being they were more comfortable. It turned out, that these larger tires were also great at shock absorption and traction on loose surfaces and it didn't take long before some folks discovered they were great fun bombing down mountains. 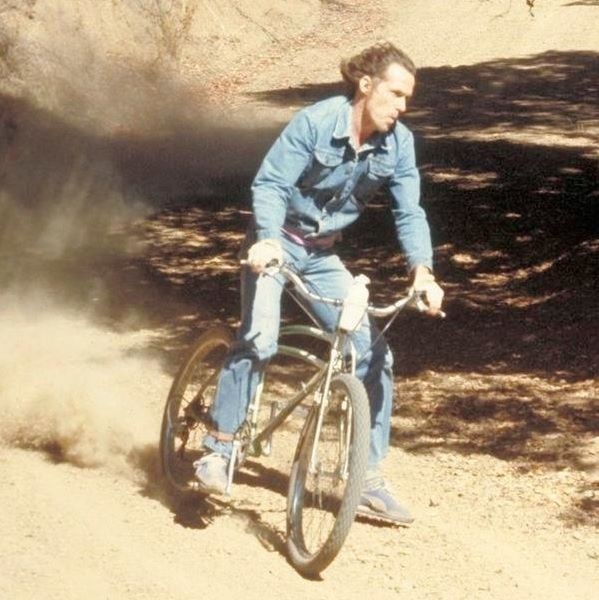 (4) Is this Gary Fisher? Joe Breeze? How can you tell one fella in a Canadian tuxedo apart from any other?

Later, the industry would catch on to the trendiness of 26" wheels, and ever since the 559 mm (26") wheel has been a mainstay. The 26" wheel makes sense in the same way that 700A, B, and C made sense though, which is that you might want to put a way fatter tire on your bike to make it perform a different way, but you don't want it to be significantly higher off the ground because then it might not fit you and it might perform very differently. So you make a smaller rim to compensate. 26" wheels, in a way, allow the bike to handle roughly the way a bike "should" by still being able to have a big ol' comfy tire on it. A smaller wheel also has more intrinsic strength so you see them used in lots of cargo bikes and bikes meant to be super durable.

This is a very simplistic history (please, please don't come after me fact-checkers--I don't even know how I came to know all this, I picked it up via bike-wrenching osmosis). For brevity, I have elected to leave out telling about all the many, many, many sizes that just didn't make the cut. Thank goodness they didn't. My job already requires me to have too many numbers memorized.

You may be familiar with other, now more common tire sizes such as 650B, 650C, 29ers, etc. As you might predict, the 650B and C has a similar history to the 700C size. Lots of times these sizes come out of the woodwork and grow in popularity because it's exciting to have something "new" and "different" to sell than what's on the market. People dig those fads. But the irony is all this stuff has been around for over a century. But, I guess when what you sell is based on one of the oldest, longest-lasting, most ubiquitous, and most important inventions in human civilization, you'd be tempted to reinvent the wheel just to keep people interested.

(0) Gary Larson The Far Side