The first visit on my agenda was with Clarijs (pronounced “Claire-ICE”). They are the makers of the colorful cargo bike rain canopies and bike bags that brighten up our shop and keep our customers’ kids dry and toasty inside their cargo bikes. We’ve been a Clarijs dealer for several years, originally via Workcycles, another Dutch brand. But eventually, we became such big fans of their work and were ordering such large quantities we decided to order from Clarijs directly. We love how you can take one of their bright panniers or Bakfiets rain canopies and instantly give a black or grey bike a dynamite splash of color and personality. 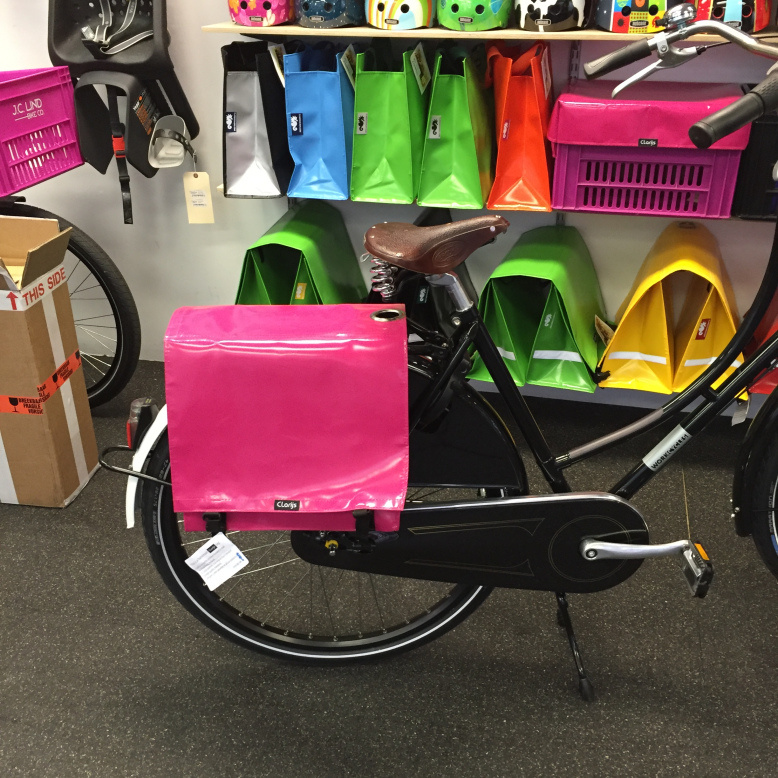 The trip to see Clarijs took me to the southwestern corner of the Netherlands to the region known as Zeeland. Clarijs is located in the small village Serooskerke which is near Middelburg. I’d never been to this part of the Netherlands before, but even in a country this small, it’s exciting to be en route to a totally new area. 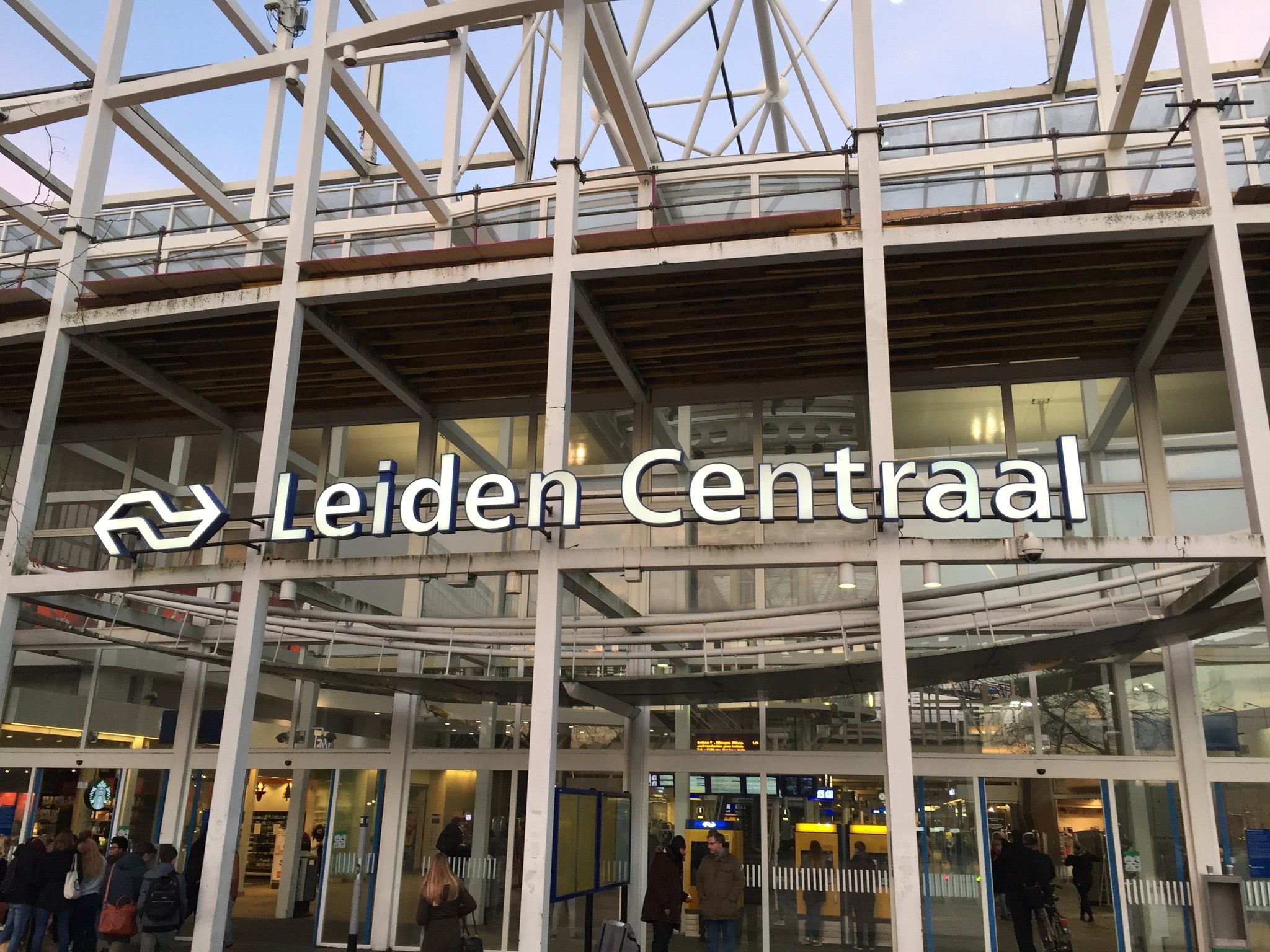 I stayed with my good friend Joost in Leiden the night before my visit to Clarijs. He was nice enough to offer use of his car for the trip. I was definitely tempted as it would’ve saved me a lot of time vs the train. Ultimately I opted for the train because it’s way more relaxing to see the countryside and you can actually do something with your time. I get stressed the rare times I drive in Chicago when I know where I’m going. Driving directionless in a foreign country? No thanks.

Besides, my main justification for bringing my fancy new folding bike on this trip was for it’s magical multi modal capabilities for just this type of A to B travel. Oh, and it’s probably worth pointing out the last time I drove Joost’s car, I got a speeding ticket in Germany on our way back from Eurobike so that made the decision an even easier one! 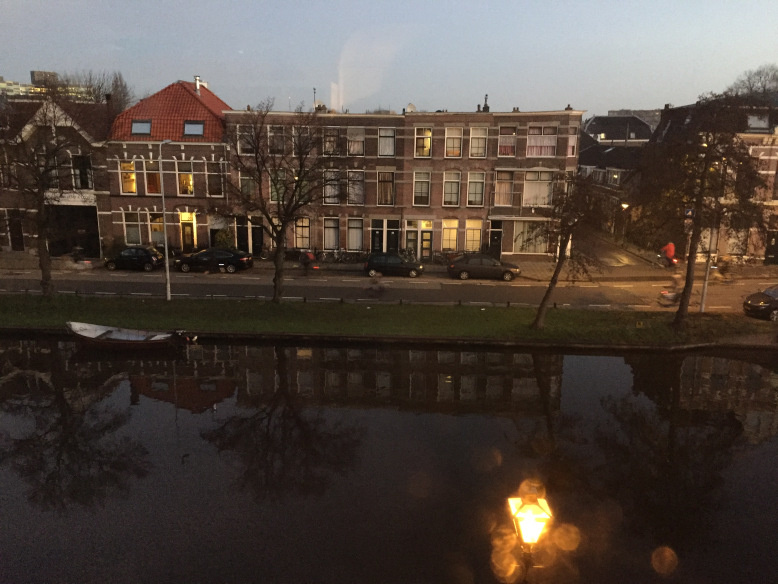 Rise and shine from Leiden.

One of my favorite videos I took on the entire trip was on the train ride from Leiden to Middelburg. This is the bike parking at the Bergen op Zoom train station. Yep, that’s the town’s name and yep, that’s how much bike parking is required for this town with a population of 65k! I can’t wait for the day when this sort of infrastructure is common stateside. A guy can dream can’t he? :)

Upon arriving in Middelburg, Diana (one of the Clarijs owners) was nice enough to come pick me up at the train station. I got a chance to meet Diana’s husband Frank in the summer of 2015 when we met up at Eurobike, but this was my first time after countless emails getting to put a face with her name. 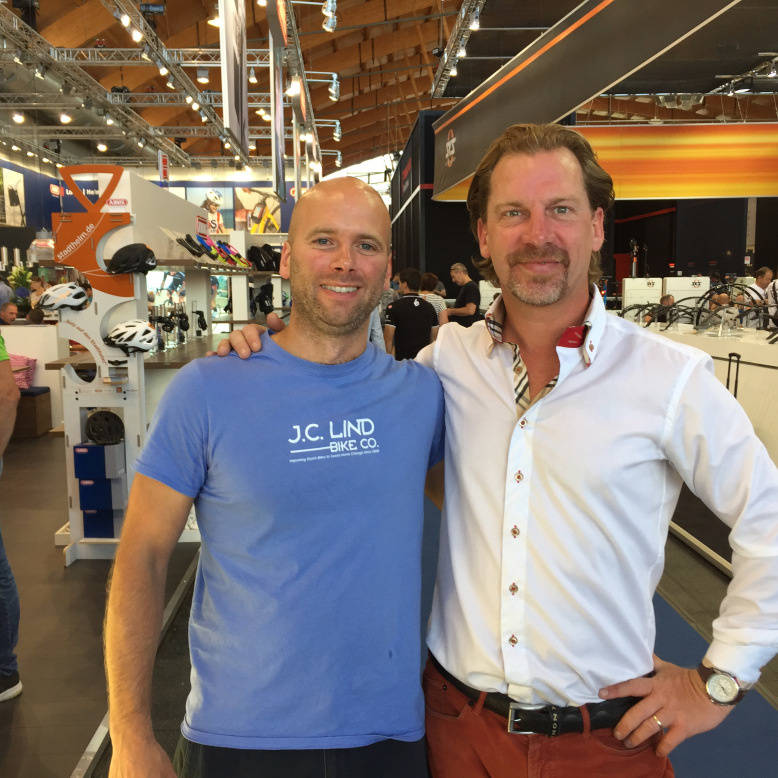 Clarijs was founded in 1948 by Diana’s grandfather and granduncle and originally made leather saddles and then when demand for that slowed down they started making boat sails. They still do some business repairing boat sails and boat covers. Diana and Frank have been involved for many years with running the business and officially took over complete ownership just a few years ago. 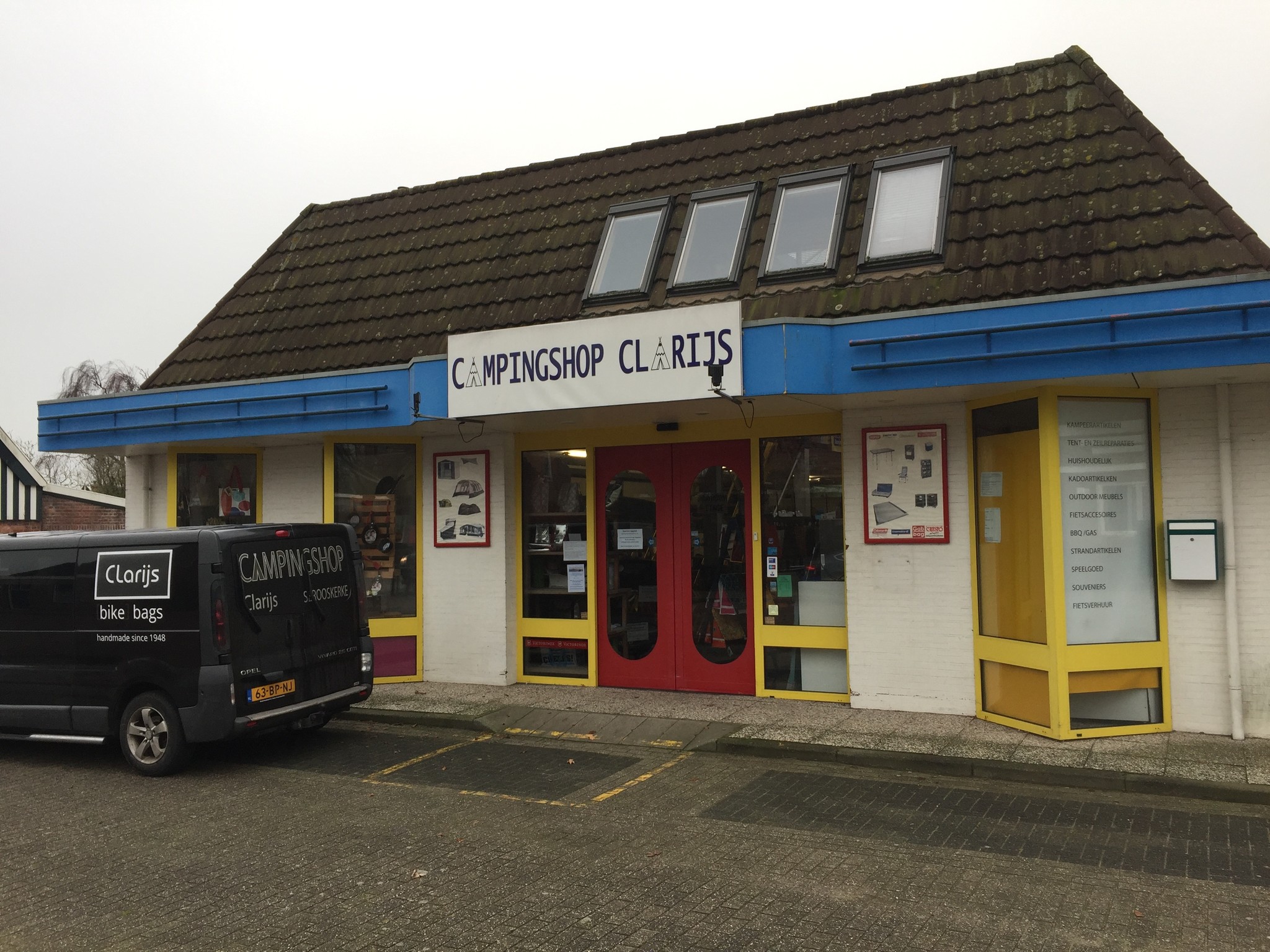 The company is part retail camping (or to be more accurate glamping) store and part bike bags & cargo bike accessories factory. The bike stuff goes down in the back room of the store. The camping shop is closed in the winter which is when they can focus all their attention on the bike business. 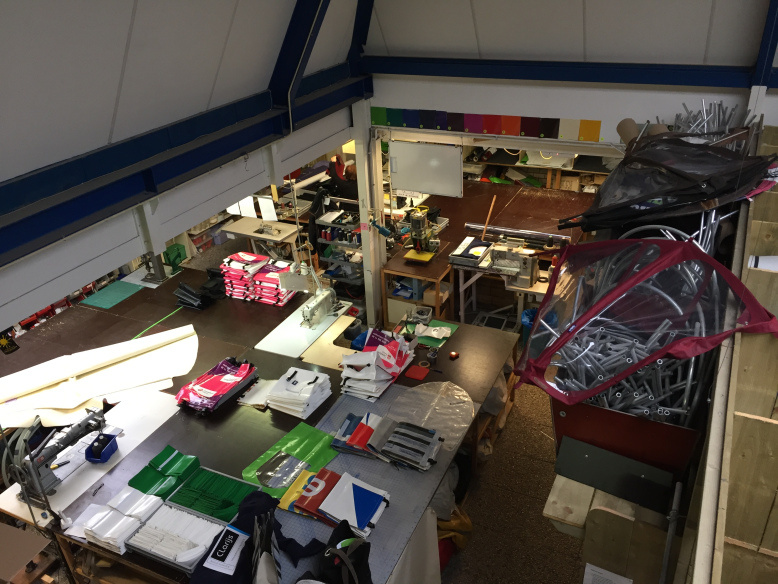 A view of the workshop from the second floor. 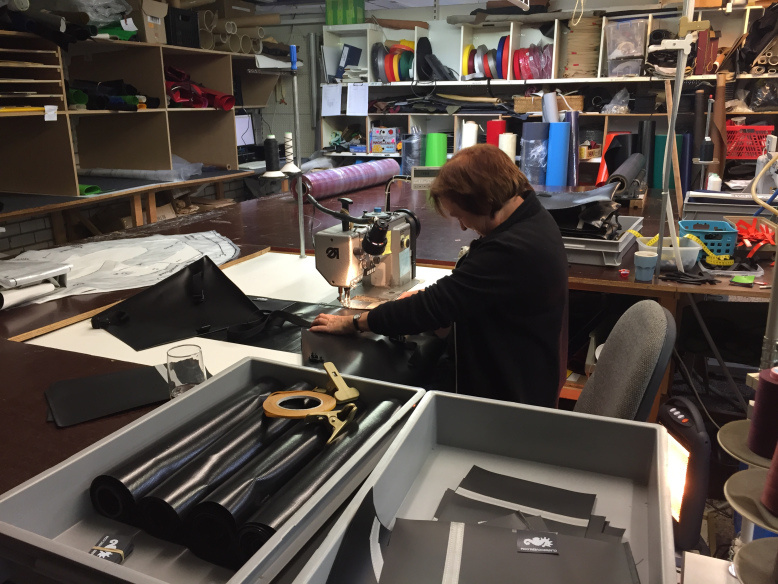 Monique showing me how it’s done. 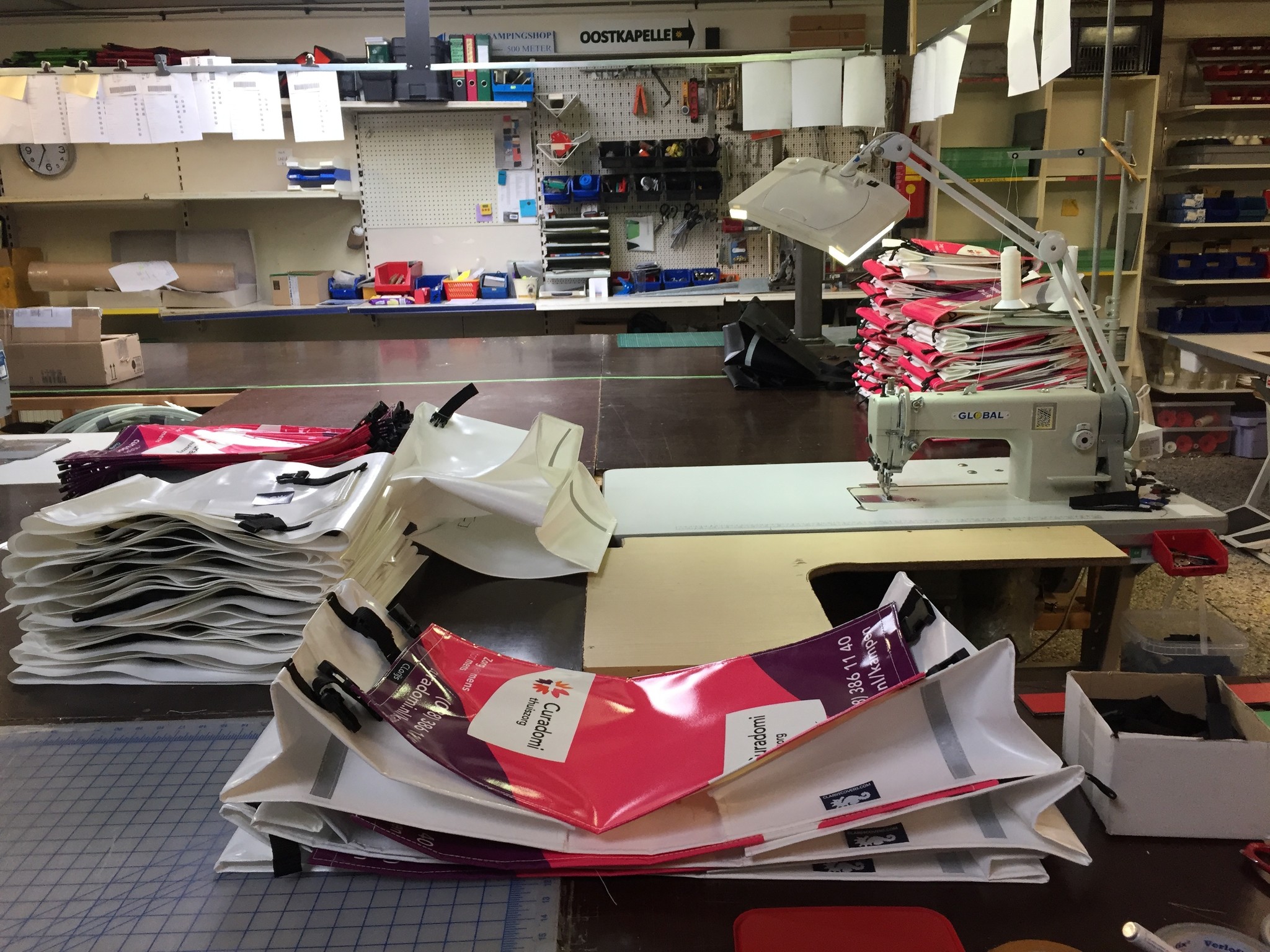 A large order of custom branded bike bags for one of their clients. 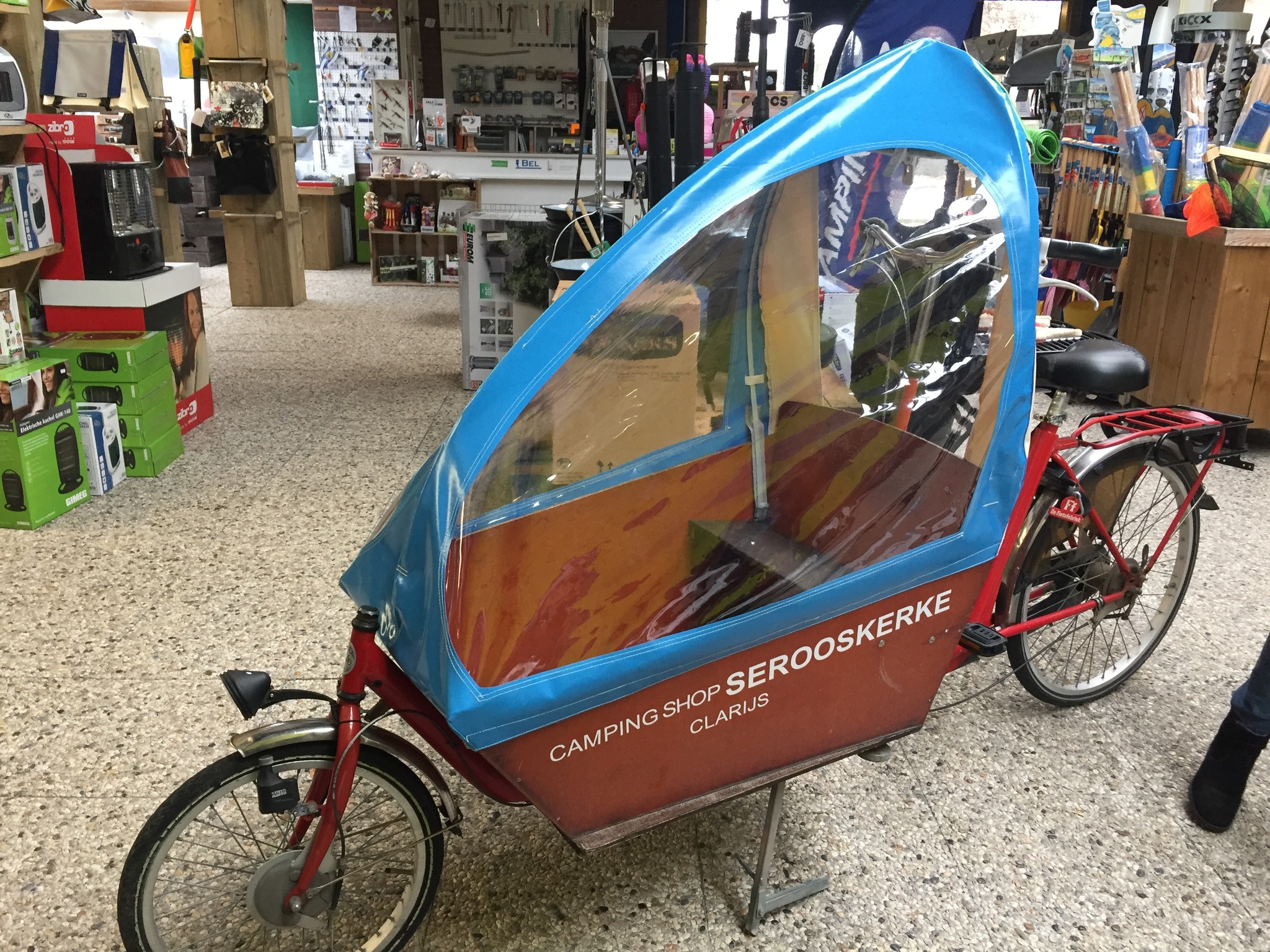 Here’s a prototype of a high ceiling rain canopy which they’re messing around with. 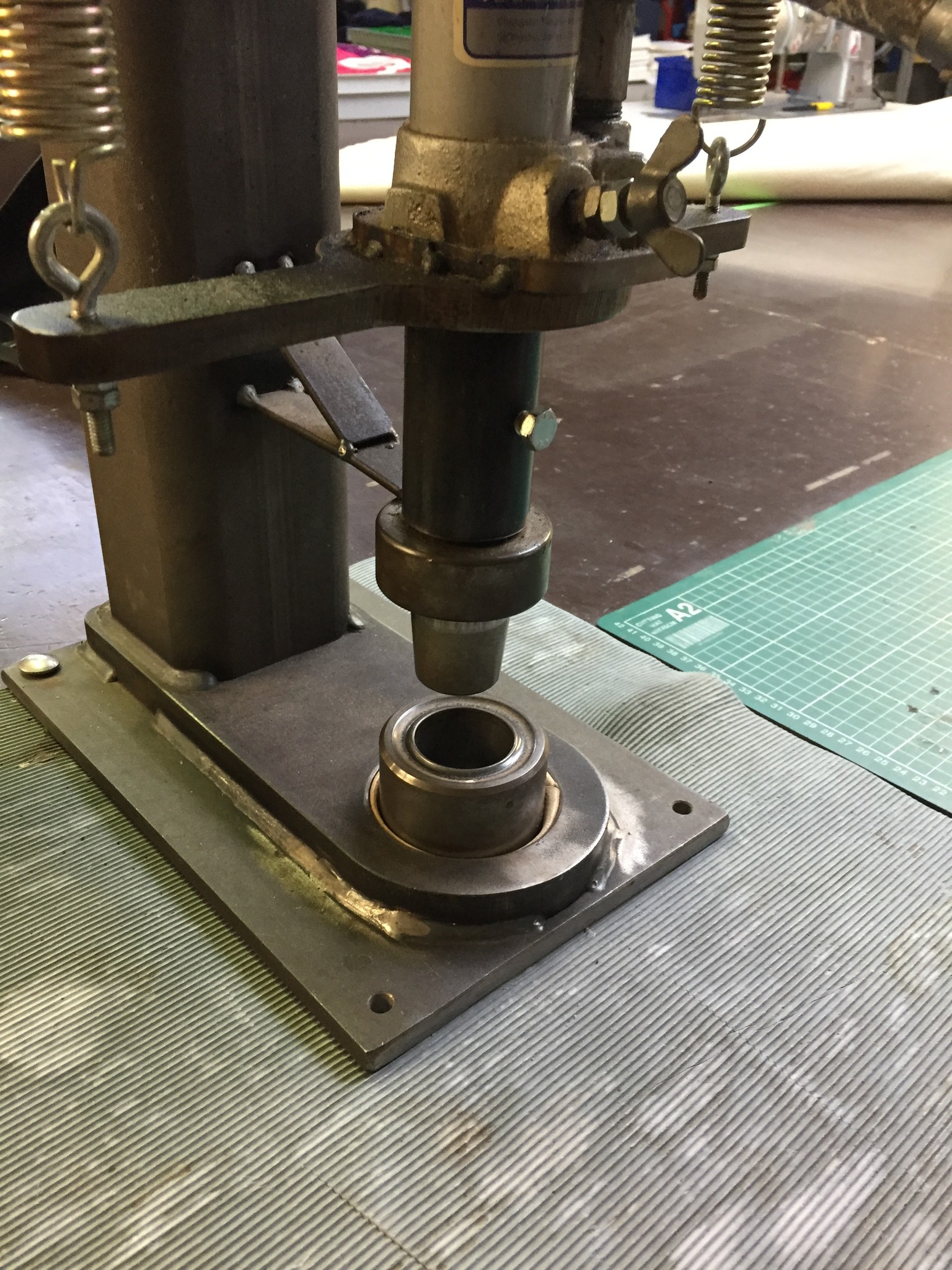 Here is the punch they use to install those giant anti-theft grommets on the top of the bike panniers. Clarijs acquired it via old school bartering with a client of theirs who saw they had a need for such a tool and gave it to them in exchange for some product. 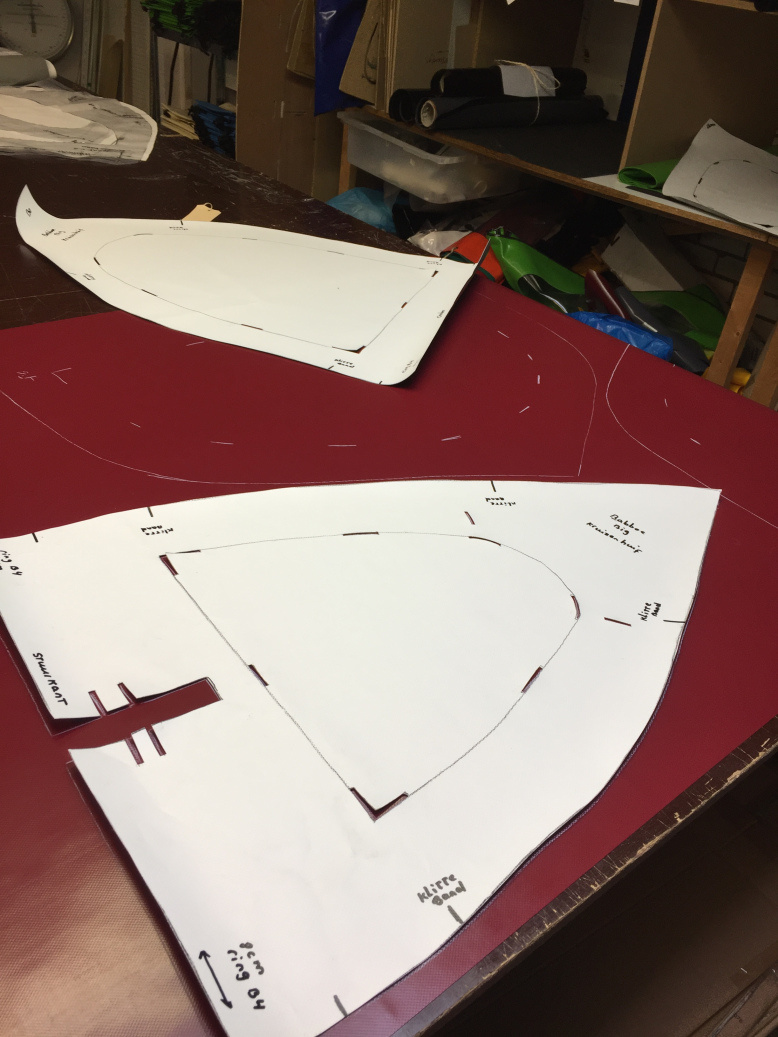 Stenciling out the back section of a Bakfiets/Kr8 rain canopy. 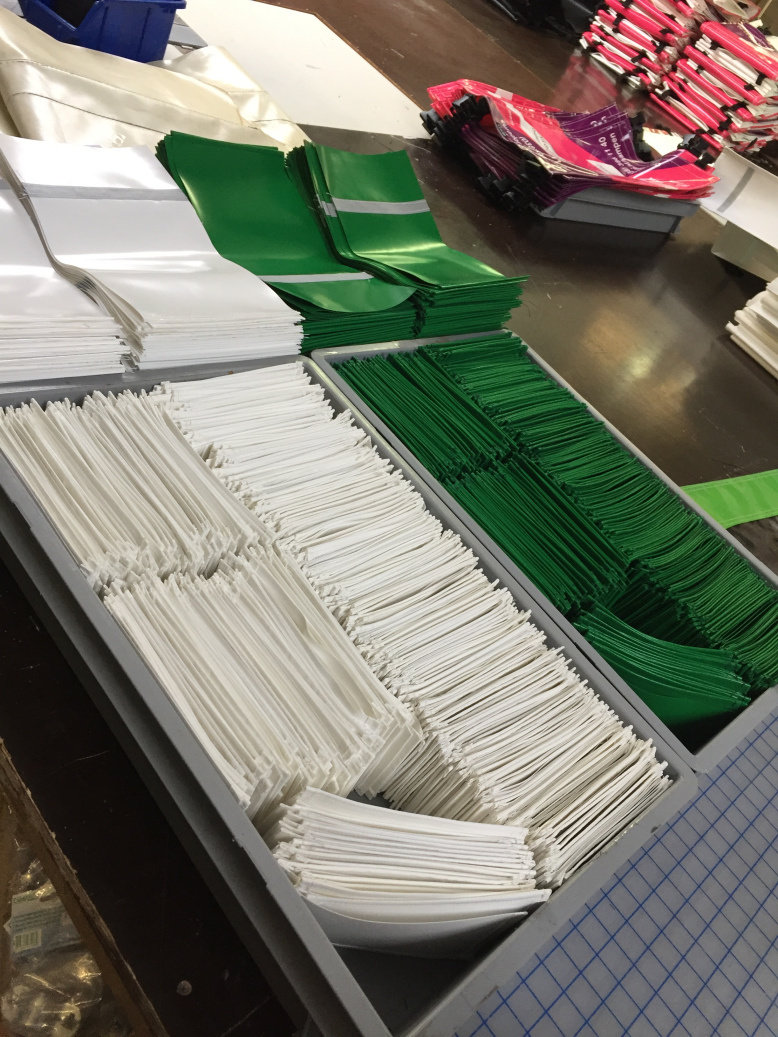 As a small, small business owner, I found it fascinating to see how Clarijs (itself a small business) has done everything they can do to make their bag construction as streamlined and convenient as possible. As such, the bag assemblies are done in steps, very much in assembly line fashion. Near the top you see the front/back sides of their panniers with the stripes of reflective material and in the foreground you’ll see the flaps that help to keep the rain from getting in. On the Clarijs cutting room floor, even the flaps have flaps. 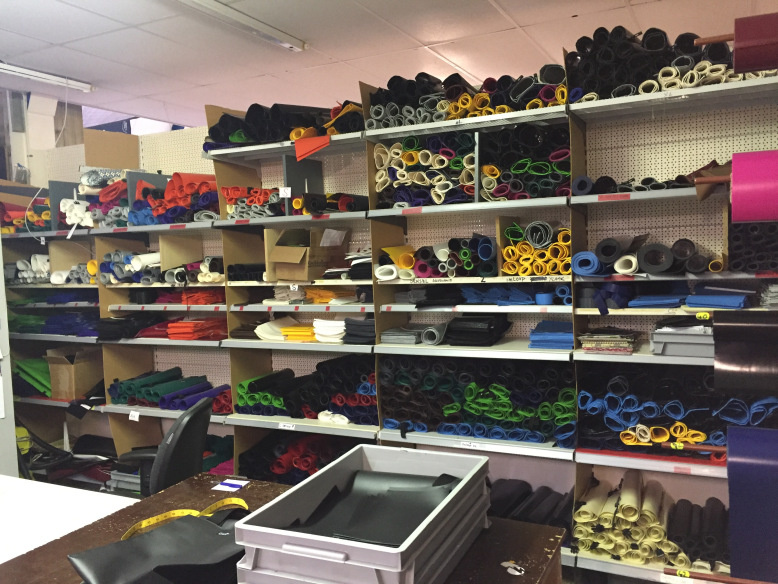 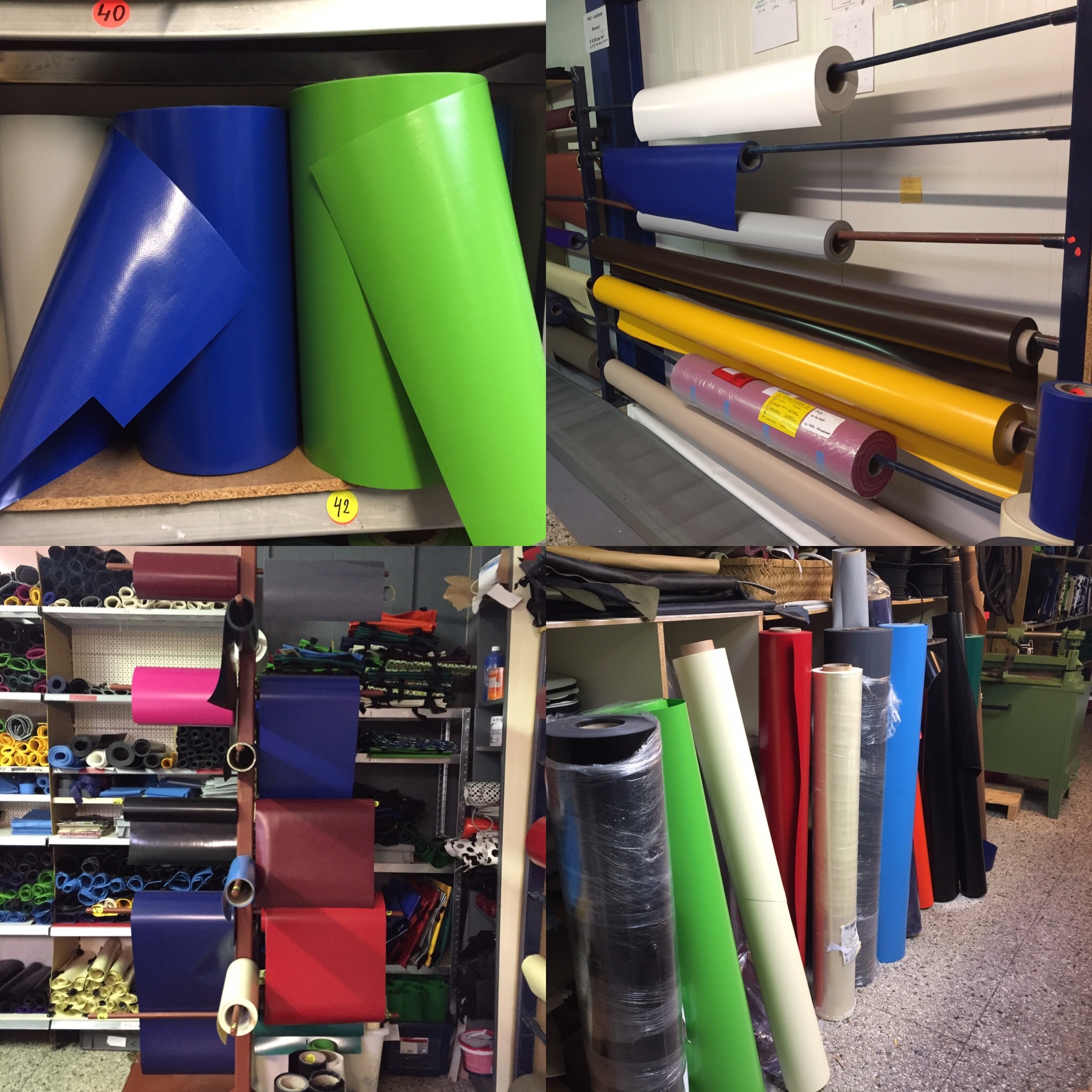 It’s surreal and fun (in a Willy Wonka sort of way) to see huge spools of fabric you find familiar but it’s out of the context you normally see it in, i.e. a bicycle pannier bag. 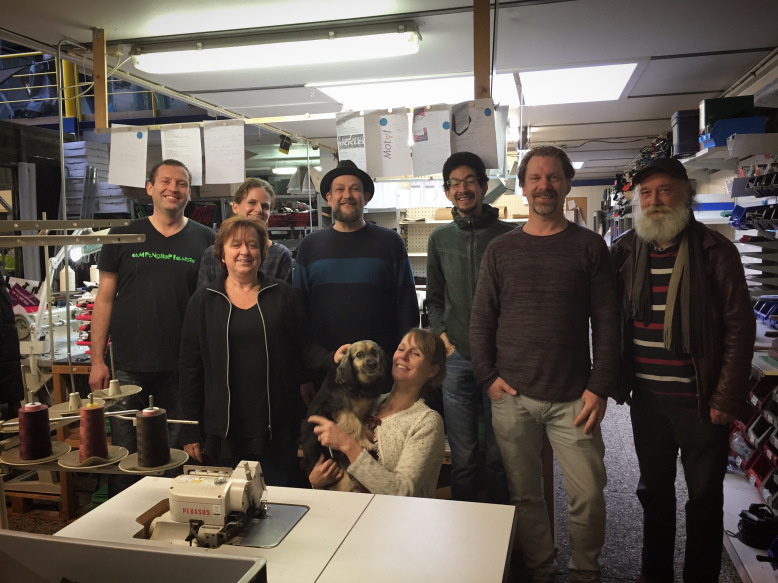 Meet the fine folks from Clarijs. Clockwise from back left (Toni, Leo, Twan, Ozzie, Frank, Kees, Diana, Sammy and Monique). This is where the real value of making this sort of trip lies, in knowing the people behind the products. 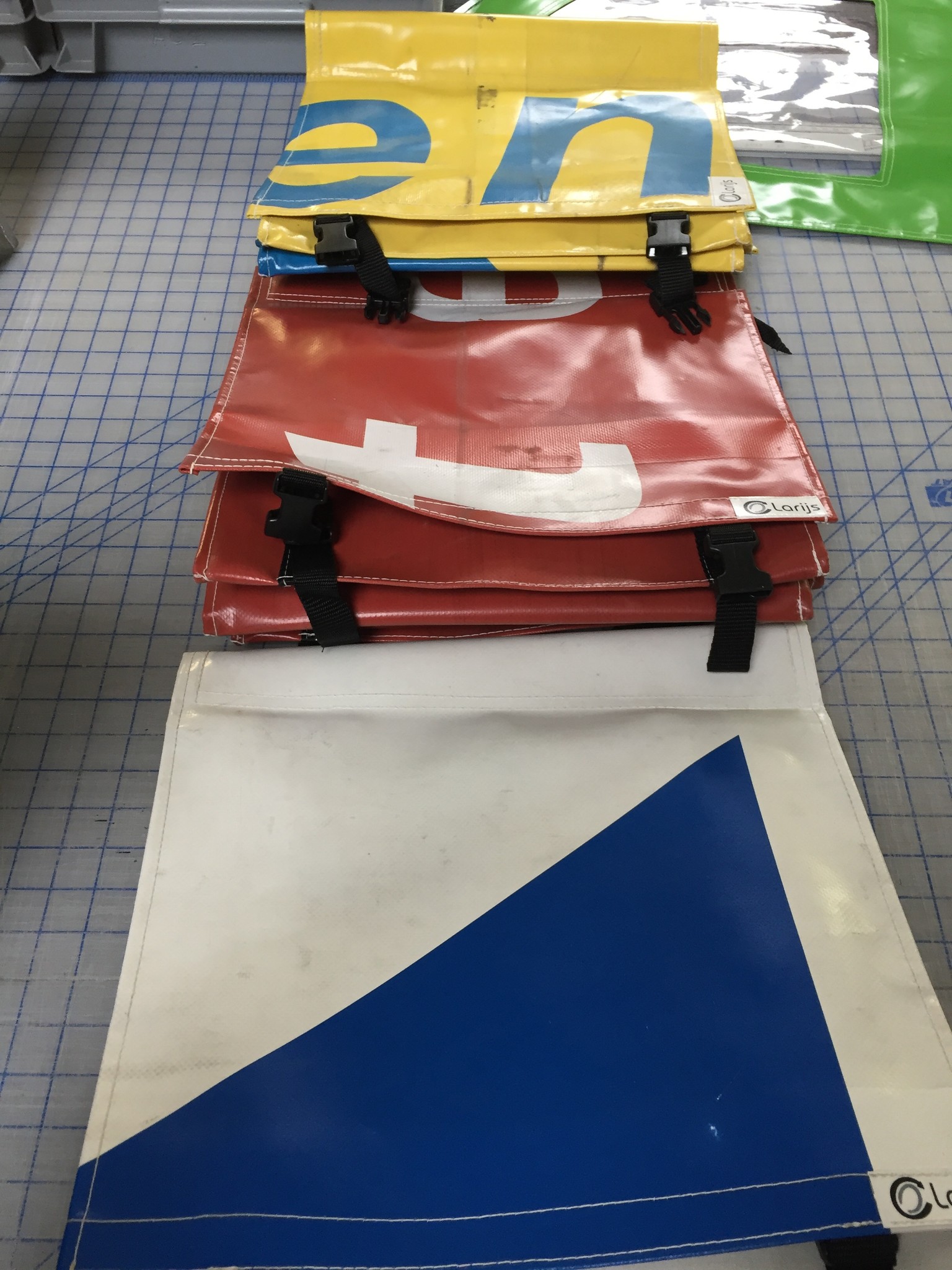 Checking out some of the patterns on the recycled bags they had in stock. Clarijs purchases these recycled materials, mostly from old truck tarps and large advertising banners, which they then clean and make bags and covers from them. We haven’t stocked these up until now but I really dig some of them and am now planning to bring some to The Shop. 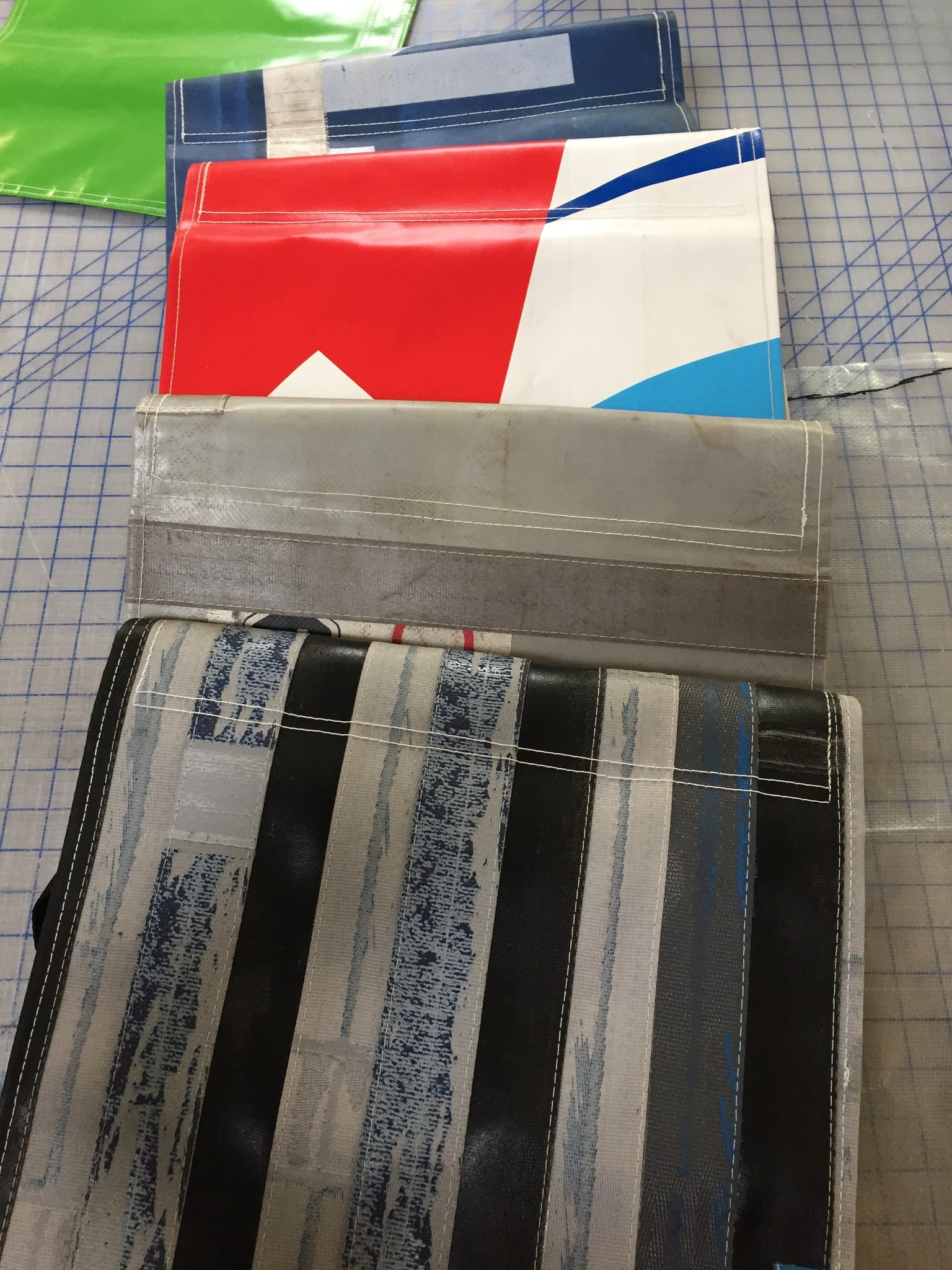 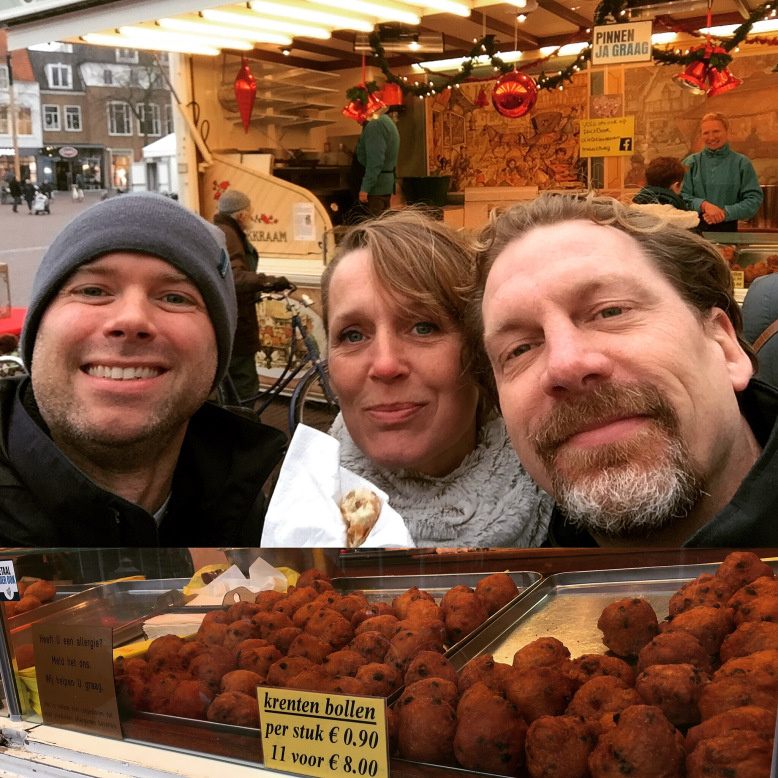 Enjoying some oliebollen, a Christmastime Dutch treat of fried dough goodness. Thank you Frank & Diana for your hospitality!

One interesting side note. Clarijs is close to the Oosterscheldekering sea defense wall, which is where they host the Headwind Championships.

I remembered coming across this video in my twitter feed shortly before my trip and then Frank mentioned it while I was there. Isn’t it hilarious just how small the world has become?

Ok, I’ll close on that. Stay tuned for the next part of my journey where I finally get to see where our most popular bike, the Workcycles Fr8, is made.